Contractors pursuing new infrastructure projects are continuing to diversify across industry sectors and geographies in response to continued weakness in mining-related work. 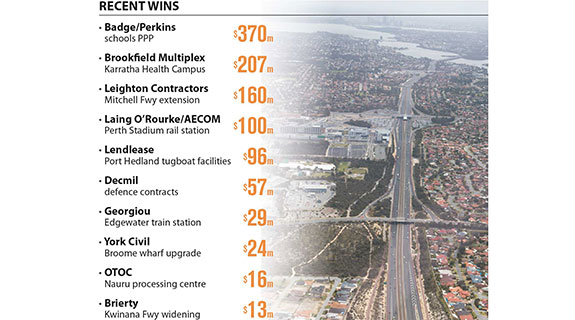 Contractors pursuing new infrastructure projects are continuing to diversify across industry sectors and geographies in response to continued weakness in mining-related work.

Opportunities in the mining sector have not dried up completely, but the slowdown means government infrastructure projects have become more significant.

In some cases, the two intersect, with new projects at Port Hedland being a prime example.

For example, Lendlease’s engineering business has been awarded a $96 million engineering, procurement and construction contract to deliver a new tug harbour and upgrades to the existing tug harbour at Port Hedland.

It has been contracted by BHP Billiton, which plans to spend $326 million on the new and upgraded infrastructure, along with the purchase of six additional tugboats.

With the Pilbara Ports Authority planning to award a contract for a second tugboat operator at Hedland, there is a good chance more work will follow.

The tug harbour contract adds to a diverse range of work undertaken by Lendlease in recent years, including road construction, Northbridge tunnel maintenance and electrical, mechanical and maintenance services for BHP in the Pilbara.

The group is also involved in land developments, and Lendlease Building regional director Andrew Schroth said it continued to focus on its integrated model.

“Our clients can use our development, investment and construction skills individually, but when two or more of these skills come together on the same project we’re at a significant competitive advantage in tackling large and complex projects,” Mr Schroth said.

Decmil Group has achieved considerable success in diversifying its business, with the latest news being $57 million of defence department contracts across three states and territories.

Other recent wins for Decmil include a fuel terminal in Victoria, and school construction in New Zealand.

OTOC has also diversified its work, albeit on a smaller scale.

Its latest win, as a sub-contractor to Queensland-based Canstruct, was for $16 million of construction work at the Australian government’s Nauru immigration processing centre.

Bunbury-based Perkins Builders and Adelaide-based Badge Constructions have been two of the biggest winners in the infrastructure space, after the EduWest consortium was named this month as preferred bidder for a $370 million public private partnership.

EduWest, which also includes Macquarie Capital and Spotless, will be responsible for funding, designing and building eight new schools in Perth and maintaining them for 25 years.

Elsewhere, Brookfield Multiplex confirmed its ranking as the state’s leading construction company when it finalised contracts for the $207 million Karratha Health Campus.

Other winners this year include Leighton Contractors, which was awarded a $160 million design and construct contract for the northern extension of Mitchell Freeway, and Laing O’Rourke, which recently started work on a train station and associated infrastructure at Burswood.