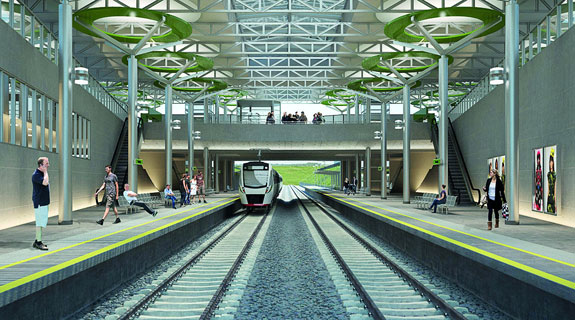 An early concept for the proposed Forrestfield Station.

The state government is preparing to create a shortlist of contractors for its $2 billion Forrestfield-Airport Link rail project, revealing today it had received five expressions of interest from a range of construction groups keen to add the project to their order books.

Mr Nalder said the government was pleased with the quality of the applicants, among them a number of major international contractors.

The Public Transport Authority will evaluate the submissions to determine the shortlist, while a contract will be awarded by the middle of next year.

The contract will be a design and construct deal, including tunnel works, civil infrastructure, track, stations and rail systems.

Water and soil quality sampling along the route is almost complete.

“This innovative project will see two rail tunnels bored underground from Bayswater, beneath the Swan River and Perth Airport, out to Forrestfield,” Mr Nalder said.

“It is vital that we are aware of any potential soil or water conditions prior to tunnelling, to ensure construction impacts during the delivery phase are minimised.

An independent analysis of the Forrestfield Airport Link by Westralian Infrastructure indicates the project is expected to create an economic benefit of around $3 billion.