SPECIAL REPORT: The Italian contractor managing Perth’s largest infrastructure project has outlined some of the hurdles it faces doing business in WA. 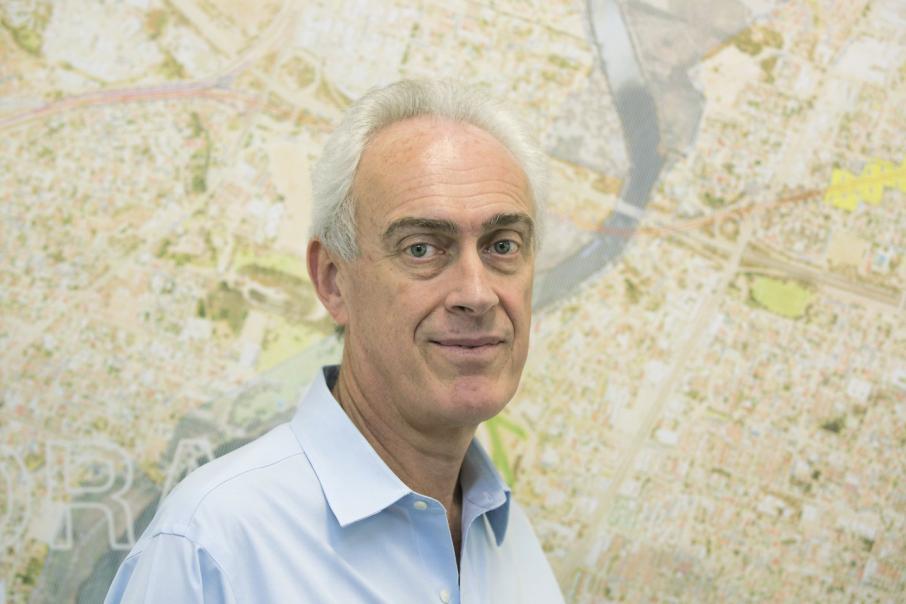 The Italian contractor managing Perth’s largest infrastructure project has outlined some of the hurdles it faces doing business in WA.

Having completed more than 2,000 complex construction projects around the globe during its 110-year history, Italian business Salini Impregilo is planning to add opportunities in Australia to its order book.

The Milan-headquartered company is gearing up to start tunnelling work at the $1.86 billion Forrestfield Airport Link – its first project in Western Australia and just its third in Australia.

“This project is very important to us, but we haven’t come here just for one project,” project director Richard Graham told Business News.

They have signed a $1.18 billion contract to build the 8.5-kilometre parallel tunnels from Bayswater to Forrestfield. 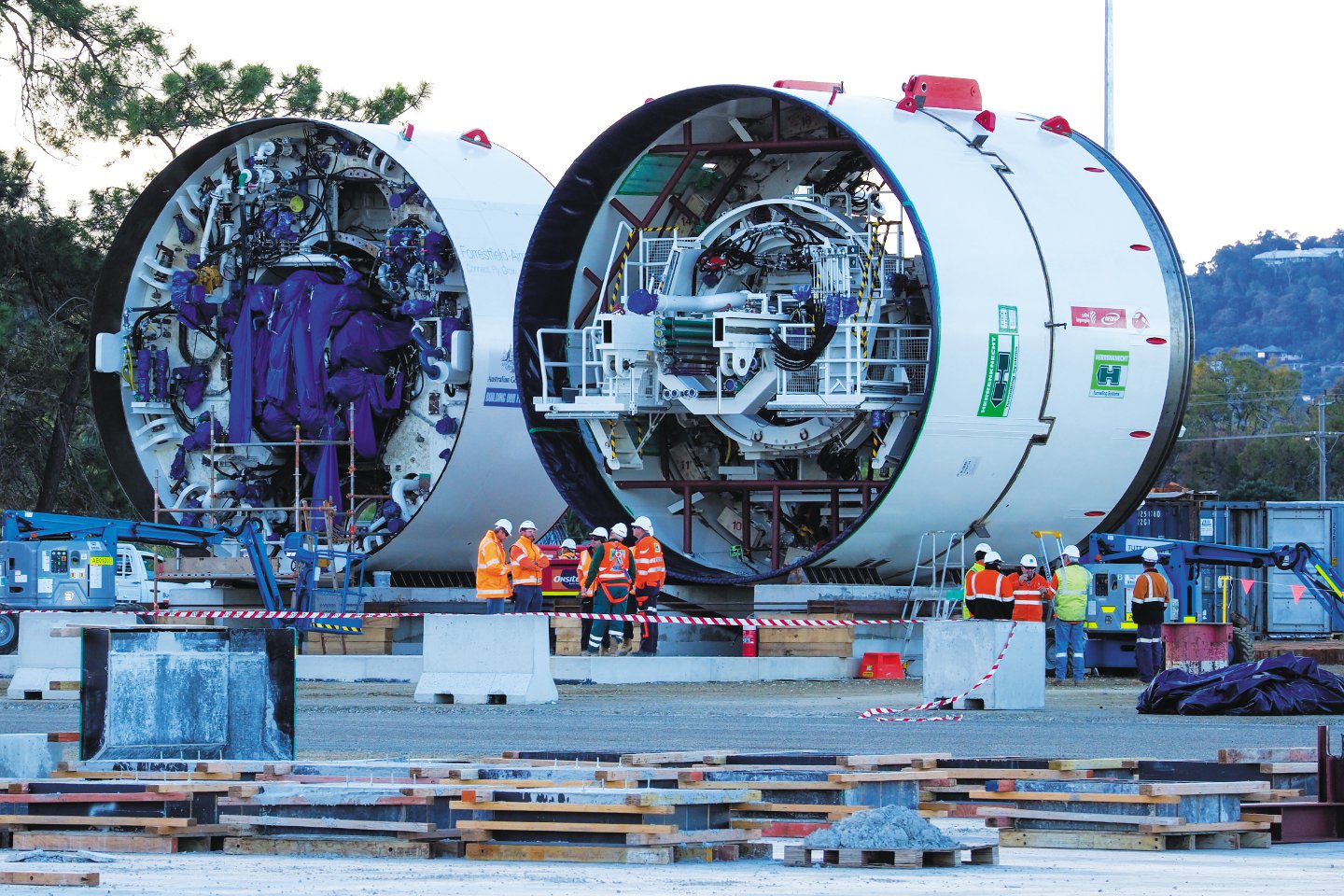 Image: Tunnel boring machines will do much of the heavy work

The joint venture is also responsible for building three new train stations, along with laying the tracks, the power supply for the trains, and signalling and communications systems.

“We are basically doing everything except supplying the trains,” Mr Graham said.

The tunnels will run under the Swan River and Perth Airport, which will add to the technical challenges facing the project.

“This is quite a challenging project,” Mr Graham said.

“The geology is variable between sands, alluvials and clays, and we are always working under water.”

To help managed the geotechnical risks, more than 8,000 instruments will be used to monitor the ground conditions.

The task facing the joint venture includes manufacturing 60,000 concrete segments at its own recently built plant in Forrestfield to line the tunnels.

It is also building a slurry treatment plant to separate the material that will be extracted from the tunnels via a pipeline. 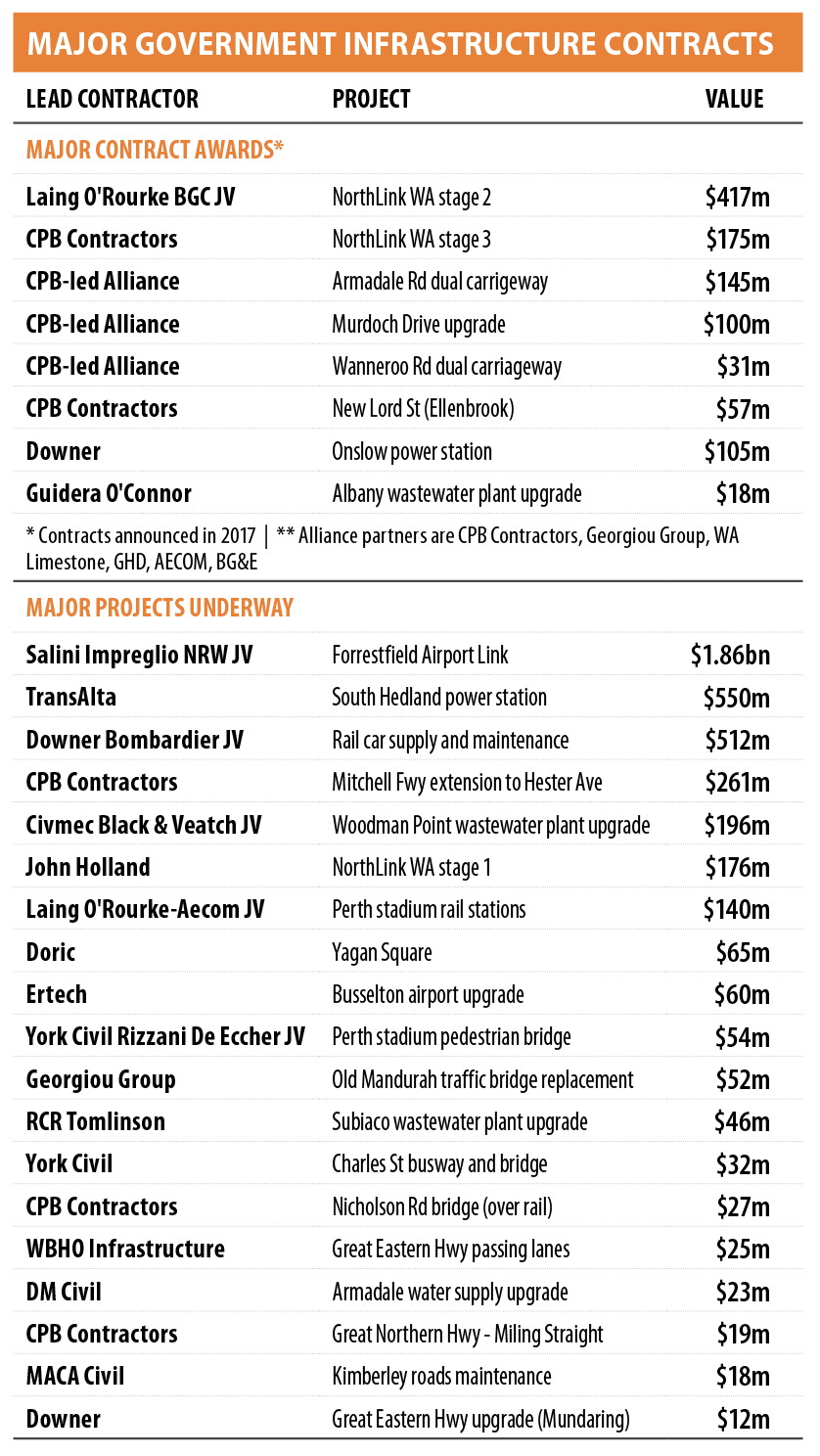 “Their main concern is how we will deal with the stakeholders here and the environmental issues, which are very local,” he said.

Mr Graham admits to being surprised by the level of bureaucracy he has encountered.

“The bureaucracy is a little exaggerated, it’s a bit over the top.”

Asked to elaborate, he said WA was worse than Europe.

“The paperwork and the bureaucracy are at a level I have never encountered in my life,” Mr Graham said.

“Here is worse than Italy.”

He said the project, due to be completed in 2020, was on a very tight schedule.

“We are going through a critical portion of the project, getting all of these approvals out of the way, development applications, environmental issues, getting utilities relocated,” Mr Graham said.

“We are very much in the hands of other people.

“Once we overcome this phase, we can control our destiny better.”

The Public Transport Authority had been very supportive, however.

“My client is very cooperative and we are aligned on moving things forward, that is a big positive,” Mr Graham said.

One of the challenges the joint venture faces is meeting the targets set by government for Aboriginal participation.

Two per cent of jobs need to be for Aboriginal people, and the project has already exceeded that, but a bigger task is awarding $15 million of work to Aboriginal businesses.

The joint venture has been working with the Noongar Chamber of Commerce but has struggled to find businesses with relevant experience.

NRW has extensive experience working with indigenous contractors in the Pilbara, but that has not been transferable to Perth.

“We thought it would be more helpful, but that experience is not directly transferable,” Mr Graham said.

He suggested the joint venture might need to look wider to achieve the government’s target.

“We have been focusing very much on the Noongar (people) and maybe we should be spreading it more widely to all Aboriginal groups,” Mr Graham said.

“I think we will become more successful in fulfilling our objectives.

“It’s a challenge, but we have committed to it and are working towards it.” 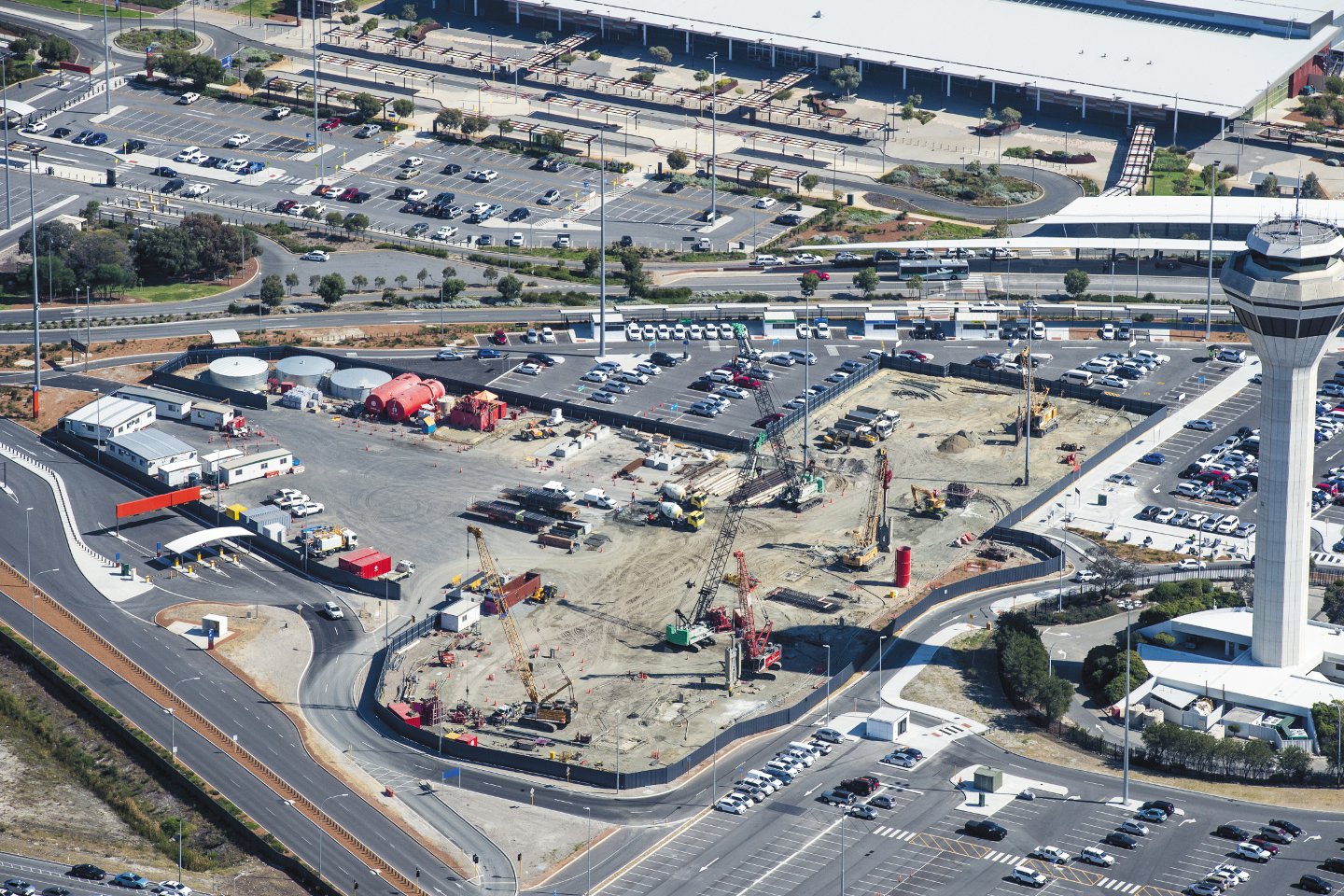 The Forrestfield Airport Link currently has 600 people working on it, and that will peak at 800.

Among those 600 are about 120 design engineers from GHD, Coffey and Geodata, while Salini has engaged WSP Parsons Brinkerhoff as design verifier.

Jacobs Engieering has also won work on the project, after signing an $8.7 million contract with the Public Transport Authority to provide technical support.

Nearly all of the workers will be locals, though Salini is binging about 15 experienced operators to Perth to run the tunnel-boring machines.

“We will also be training people here, so by the end the mix will probably be different,” Mr Graham said.

Salini’s entry to the WA market will add to the competition facing established contractors, which are adjusting to the slowdown in resources work.

Monadelphous Group, which remains focused on the resources sector with clients across iron ore mining, LNG, nickel and alumina, is the largest contractor in WA.

It has more than 2,900 staff in WA, according to updated data for the BNiQ Search Engine (see page 24).

CPB Contractors is another big player, with most of its work coming from government, specifically Main Roads WA.

Several contractors, including UGL, Ausgroup and SNC Lavalin, continue to have large numbers of staff on the Wheatstone and Ichthys LNG projects.

Their numbers will shrink as these projects are completed over the coming year, just as CBI Constructors has done.

US-based CBI was one of the largest contractors on Gorgon, earning $US4.7 billion ($A6.3 billion) in revenue from this single project over the past three years, according to its latest annual report.

CBI employed nearly 3,000 people in WA last year but that has dropped to 137.

The example of Laing O’Rourke illustrates how contractor numbers can swing widely.

The privately owned contractor has 1,200 direct employees in its western region, down from 2,000 six months ago but up from 700 a year ago.

With a long history in the UK, it has operated in Australia under the Laing O’Rourke banner for around 12 years, and has won large contracts on big LNG projects like Gorgon, Wheatstone and Ichthys, along with iron ore developments and more recently major government infrastructure projects.

It is currently managing civil engineering packages on Wheatstone and Ichthys, and has ongoing work in the defence sector.

Locally, it established a joint venture with AECOM to build the train station at Perth Stadium and upgrade East Perth station, while its joint venture with BGC Contracting has recently started work on the $417 million central section of the NorthLink WA roads project.

Like other contractors, Laing O’Rourke is targeting the state government’s planned rail and road projects.

“We’ve got two reference projects with Main Roads and the Public Transport Authority; they are both going well, so that’s perfect timing to build on that strong relationship,” he said.

Mr Crofts said iron ore mining was likely to provide opportunities in the next few years as the big miners evaluated new developments.

These could include Rio Tinto’s Koodaideri mine and BHP’s South Flank development, which are required to sustain production volumes.

Laing O’Rourke has considerable experience in the field, most recently working on a $200 million contract at Roy Hill’s ore stockyard, including car dumpers and conveyors.

“We have a broad range of skill and experience in that area, with a portfolio of work for Rio Tinto, BHP and Fortescue Metals Group that spans more than 30 years and every major mine and freight rail development,” Mr Crofts said.

“We certainly see ourselves as offering delivery certainty and a point of difference in that sector.”

He said the firm wanted to be recognised for innovation and excellence in the construction sector, and not just viewed as another contractor.

“We believe in early engagement with our clients so we can truly make a difference through engineering smarts,” Mr Crofts said.

Laing O’Rourke has its own R&D team in Sydney and London, working on solutions for current projects as well as more speculative innovations that might deliver benefits down the track.

Mr Crofts said a recent success from this team was the development of relocatable renewable energy generation, which the firm has piloted on its own remote projects.

He said another example of innovation was the firm’s use of digital engineering, which means every project is built twice – once virtually, before it is taken into the field.

Another positive step was the use of innovative procurement models, especially from large, government clients.

A notable example was the use of a delivery partner model for the $4.3 billion W2B Pacific Highway project in NSW, Mr Crofts said.

A consortium including Laing O’Rourke and WSP Parsons Brinckerhoff has been awarded the contract and will have overall responsibility for managing its delivery over six years.

The same model was used on the London Olympics, where Laing O’Rourke was part of the managing consortium.

“This is a very positive step and one that is required to undertake the vast amount of public infrastructure work currently in development, at a time of global skills demands and market uncertainty,” Mr Crofts said.