SPECIAL REPORT: With new project work from the resources and government sectors slowing down, contractors will need to look harder for work opportunities. 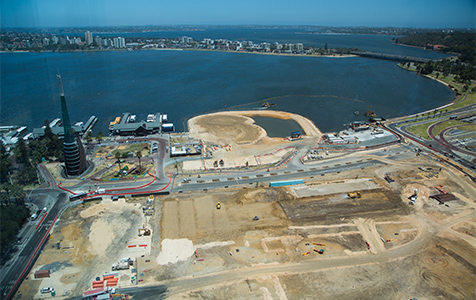 The Elizabeth Quay development is one of several major WA government projects currently under construction.

With new project work from the resources and government sectors slowing down, contractors will need to look harder for work opportunities.

So many potential projects but not enough money to develop them – that seems to be the outlook for engineering construction activity in Western Australia.

The state government, which is one of the major drivers of capital projects, is focused on cutting spending.

There is a similar trend around the country, as governments focus on managing their finances more tightly.

In tandem with that is a projected fall in resources-related construction activity, as the wave of iron ore and LNG projects are gradually completed.

The net result, according to BIS Shrapnel’s latest forecasts, is a 25 per cent slump in engineering construction spending nationally over the next four years, albeit from record levels.

BIS Shrapnel tips telecommunications and transport as offering the strongest prospects over the next five years.

Increased spending on maintenance and facilities management is the other key opportunity.

“The engineering construction boom has left an enormous legacy – a whole new built environment, which needs to be efficiently managed, operated and maintained,” BIS Shrapnel said.

Two weeks ago, one of WA’s largest surveying firms, Asphar Survey Group, announced a restructuring that was “necessary due to relatively difficult trading conditions over the last 12 months and a number of project delays”.

Earlier this month, Southern Cross Electrical Engineering downgraded its earnings outlook because projects were being delayed and margins coming under pressure.

In a similar vein, Downer announced earlier this year that its infrastructure business had been adversely affected by lower overall tender activity and a more competitive environment for tenders that had come to market.

Market leader Monadelphous Group is not immune, saying its 2013-14 revenue will fall by about 10 per cent over the previous year.

All eyes on budget

Against this challenging backdrop, next month’s state budget will be watched closely for details on future spending plans.

The government’s capital works program is spread across multiple industries (see chart below), but with a handful of very large projects accounting for a disproportionate share.

The biggest projects under way include Fiona Stanley Hospital, which is close to commissioning, the $1.2 billion Perth Children’s Hospital and the $1 billion Gateway WA roads project in Perth’s eastern suburbs.

A new project that continues to advance at a brisk pace is one of Premier Colin Barnett’s favourites – the new Perth stadium at Burswood.

The project is budgeted to cost about $1.28 billion, when the stadium, the surrounding precinct (costing $80 million) and the necessary transport links (costing $359 million) are built.

The WESTADIUM consortium, which includes Brookfield Multiplex as builder, was named this month as preferred respondent.

Another project moving ahead is the $550 million South Hedland power project, with Canadian company TransAlta Corporation named this month as the preferred bidder.

The East Rockingham wastewater project is also under way, after a very long planning and environmental approvals process (see page 29).

A big spending area that is likely to attract scrutiny is public transport, after the Barnett government deferred several projects in the May 2013 budget and the December 2013 mid-year review.

The future works program will be decided jointly with the federal government, which has promised to spend $3.8 billion on transport infrastructure projects in WA over the next five years.

Just where that will be spent is not so clear.

“This includes allocations to individual components of the program,” the spokesman said, adding that details should be finalised “in the coming weeks”.

Projects near the head of the queue include the $844 million Swan Valley bypass, which will be 80 per cent funded by Canberra.

On January 29, Mr Truss “reaffirmed” federal government funding for the bypass, which involves construction of a highway from the Reid Highway north to Muchea.

He said the bypass was “one of the priority road projects for WA” and “a key election commitment of the Australian government”.

Another project that is progressing is the $384 million upgrade of the Great Northern Highway, between Muchea and Wubin in the northern Wheatbelt.

On April 9, Assistant Infrastructure Minister Jamie Briggs said Canberra had approved funding of up to $74 million towards the next stage of the upgrade.

“It is expected the contract will be awarded in May and works to commence mid this year,” the spokesperson said.

However, past experience has shown that a promise of funding still leaves uncertainty around the start of a project.

In December 2012, for instance, Mr Barnett said the state government had funded the Mitchell Freeway extension to Clarkson, to be built by 2016-17.

Yet the latest four-year forward estimates include only $152 million, half the required funding.

The deferral of the $2 billion airport rail link and the $1.9 billion MAX light rail project, which were hot issues in the 2013 state election, has added to the wariness.

Supporters of long-promised projects like the new State Museum and the new Karratha hospital will be hoping they get better news in next month’s budget.