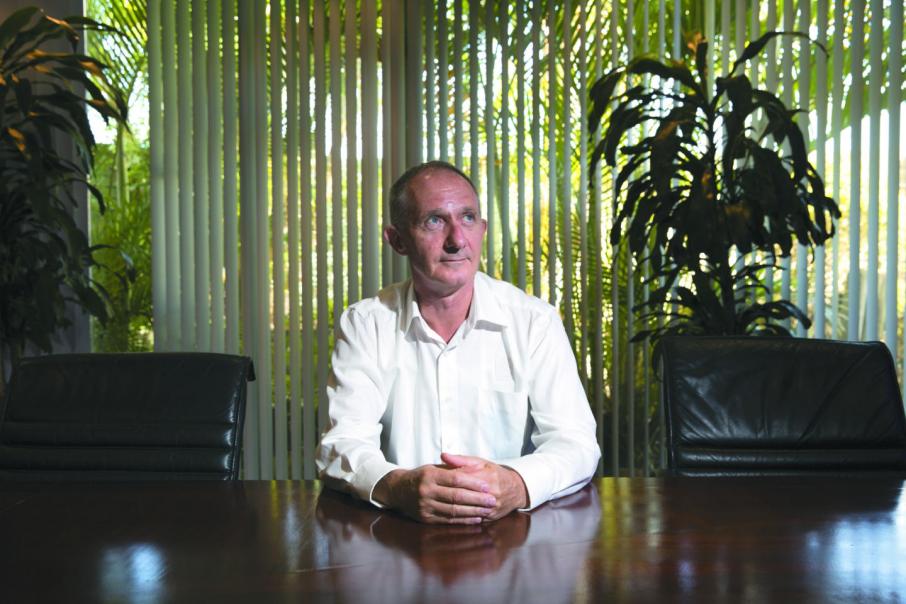 Byrnecut, Linkforce Engineering and AusGroup are among a group of local contractors to have embarked on a hiring spree during the past year, according to the latest BNiQ Search Engine biggest employers data.

Ten large contracting business have lifted their staff numbers by a combined 13 per cent in that period, to about 19,200 employees in WA, at a time when the state’s economy appears to be picking up.

AusGroup was one big mover, with staff numbers growing from around 1,500 employees to about 2,000.

(read the full PDF version of this special report)

The company won a number of contracts in the year, including for hook-up work at Inpex’s Ichthys project in the Browse Basin and at Shell’s Prelude FLNG project, while other deals include work at Woodside Petroleum’s North West Shelf Venture and at Chevron’s Wheatstone.

Byrnecut had a major win at Saracen Mineral Holdings’ Carouse Dam gold operation near Kalgoorlie, securing a $440 million stoping contract that will run for at least four years.

Byrnecut co-founder Steve Coughlan said the company had won several contracts in the past year across the country, with a majority in Western Australia.

“That’s meant we’ve had to increase the workforce to cover all that work,” Mr Coughlan told Business News.

“It will have a flow-on effect to our suppliers because it means a lot more equipment, a lot more material.”

The two commodity groups driving the most activity were gold and base metals, he said.

“The demand for extra labour is not just for us; we’re seeing the labour market tighten up because of the demand elsewhere as well,” Mr Coughlan said.

He said training would again become an issue as more workers were put on with less experience, while he flagged the state government’s recent removal of the payroll tax exemption for training as a potential problem in this space.

Numbers at other contractors were up too, with Monadelphous employing about 200 more staff to be just more than 3,100 employees in WA, and 6,164 nationally.

Barminco, UGL and CFC Group put on about 800 new workers between them.

Despite the increases, however, most contractors are operating with workforces that are much lower than the boom years (see graphic).

Probably the most significant increase over the period under review was at Downer, which reported about 3,000 staff in WA, compared with 2,000 the year previously.

That does not include numbers following the company’s acquisition of facilities management business Spotless, which also has about 3,000 staff in WA.

Other catering and facilities management players to undergo a major shake-up included Sodexo, which grew about 26 per cent to 2,400 people after the acquisition of Morris Corporation.

ESS (Compass Group) featured on the other side of the ledger, cutting staff from 5,000 to 3,000 as the company endured a large drop in revenue. 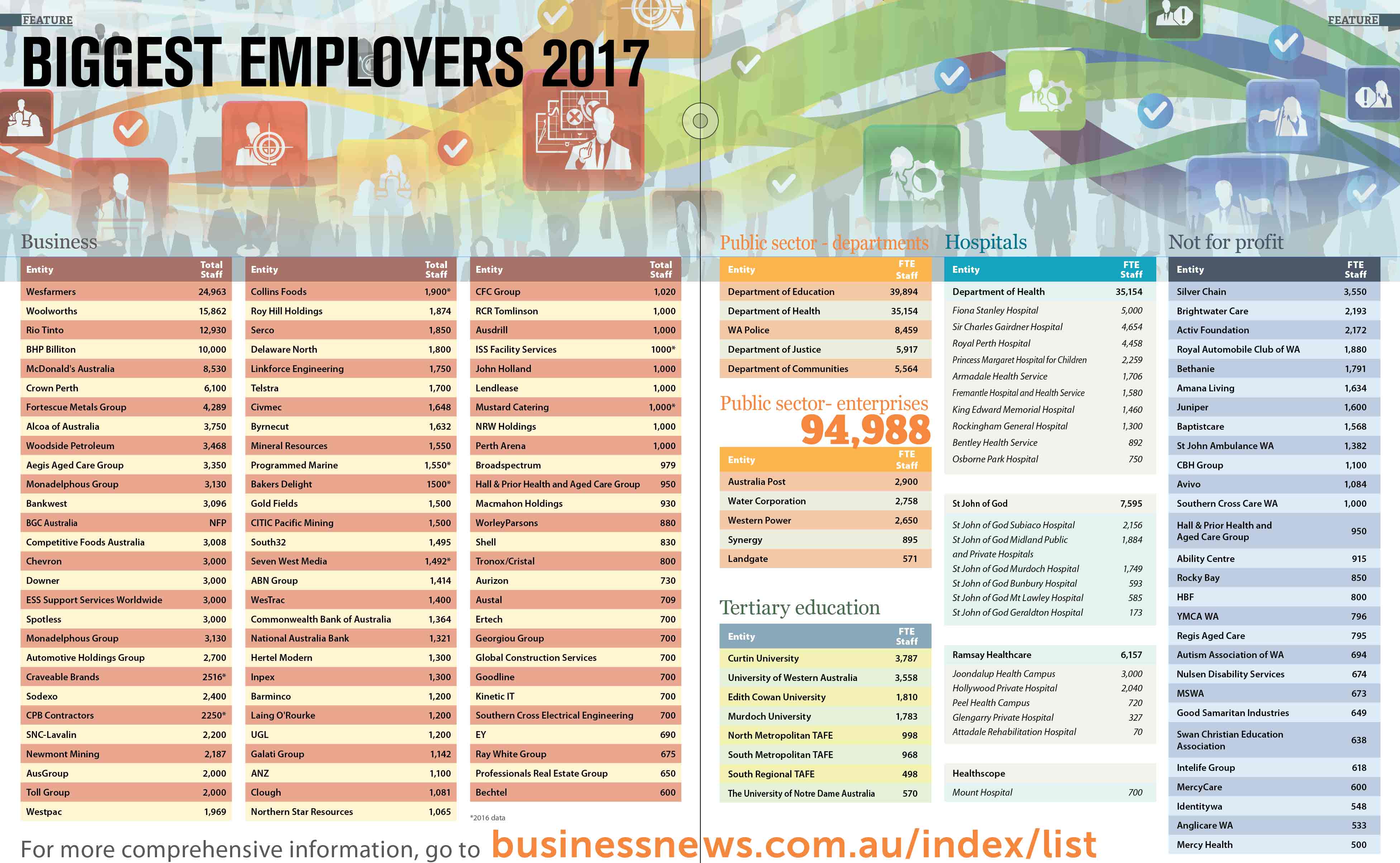 There were few changes at the top of the table, with Wesfarmers and Woolworths again ranking one and two.

The top ranking companies show a more significant shift when viewed across a 10-year period, however.

In 2007, three businesses in the top 10 were resources players, while two were contractors.

Now, there are five resources companies in the top 10, showing how the mining and energy industries have moved from construction to production mode.

McDonald’s has more than doubled staff in that period, Crown Perth has grown 67 per cent, and Aegis Aged Care Group has broken into the top 10 biggest employers.

Those moves show that, over the longer term, employment has increased across broad parts of the economy, not just in resources.

He said that was a position unlikely to be challenged for some time as demographics changed and the National Disability Insurance Scheme grew.

Retail was the third biggest employing industry despite a fall of about 6 per cent in the 12 months to August, Mr Langford said, with the industry under longer-term pressure from online operations.

Broadly, labour force numbers and other recent data gave cause for optimism, he said.

That was despite a recent re-benchmarking of the state’s population figures indicating that employment growth data had been lower than previously reported.

There were still new jobs being created.

“Total employment and full-time employment are growing, it’s just growing from a lower base (than we’d thought),” Mr Langford said.

There would likely be stop-start steps as the economy began an upswing, rather than a big ramp up, he said.

Although wage growth had been soft, Mr Langford said other recent economic data was pointing towards a recovery.

WA’s state final demand grew for two consecutive quarters for the first time in years, while car sales data was much stronger in November, up more than 13 per cent on the same time last year.

Mr Langford said there was positive data in mining, with exploration and drilling figures turning up.

Big changes are also under way in the public sector, after the state government’s machinery-of-government reforms to reduce the number of departments and a large voluntary redundancy package targeting 3,000 employees. 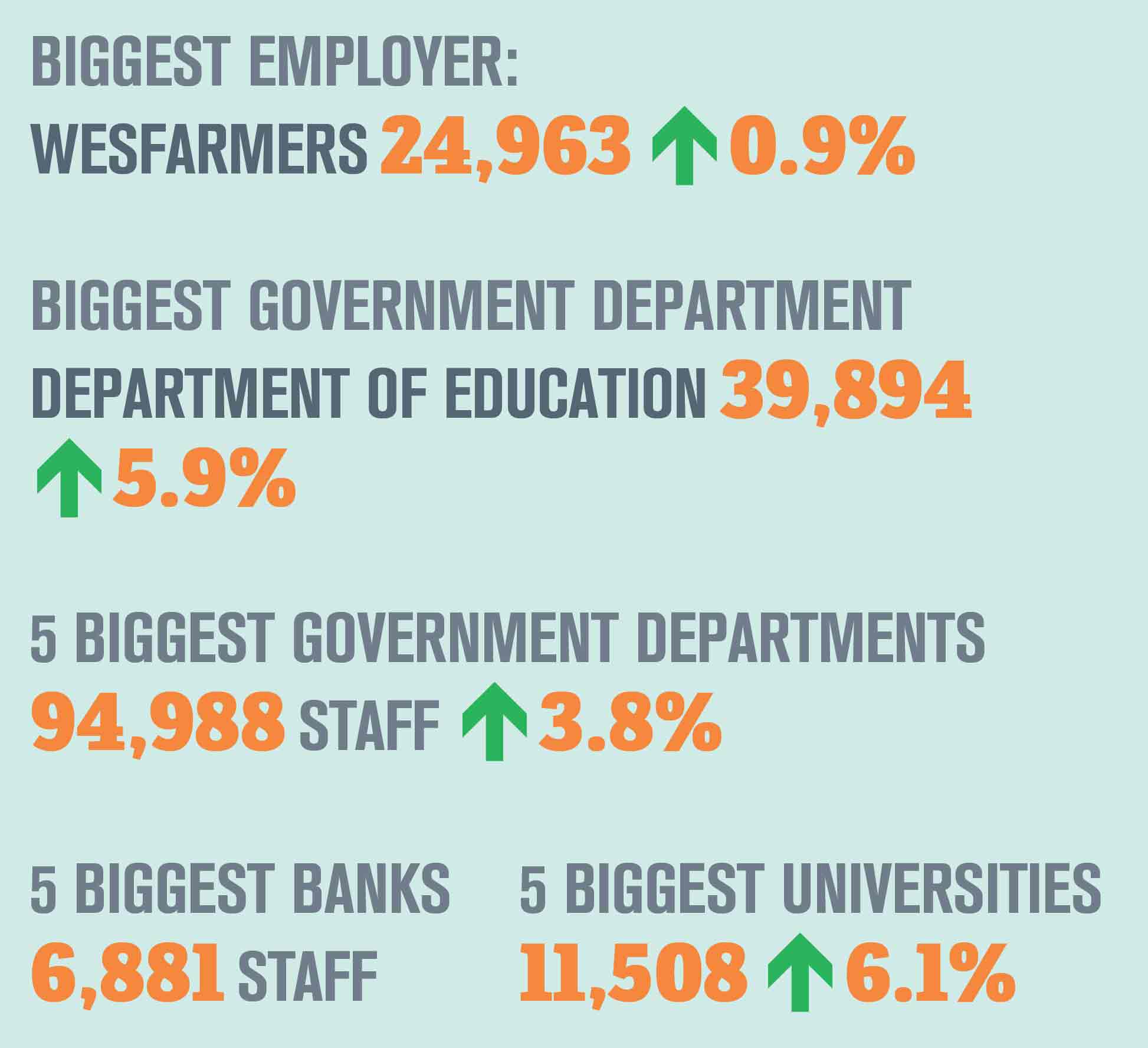 The most significant impact of this change is the creation of the Department of Justice, which comprises the former corrective services department and attorney general’s department, ranking fourth on the list.

Another large amalgamation was the formation of the Department of Communities.

The new entity ranks fifth and includes the former child protection and housing departments, along with the disability services commission.

A number of other departments were combined, including: planning and lands; mines and petroleum with parts of commerce; and the Environmental Protection Authority with the former office of environmental regulation.

But further change could be on the way.

After the government received its service priority review report earlier this month, Treasurer Ben Wyatt has said the public sector reform process would be ongoing.

“There will be another round of machinery-of-government style changes, some of them will be a bit more difficult because they will require legislative change,” he said.

“Clearly there are, when you do these sorts of things, upfront costs, but ultimately they will deliver savings to the government.”

The report proposed a redesign of the overall organisational structure of the public service.

“It is not uncommon for governments to periodically review the range of departments and statutory entities within their public sectors with a view to both rationalising and reducing their number, and to determine if the overall framework is based upon sound organisational principles,” it said.