Some members of the Nedlands community have expressed their disappointment over the recent approval of a $320 million apartment development along Stirling Highway. 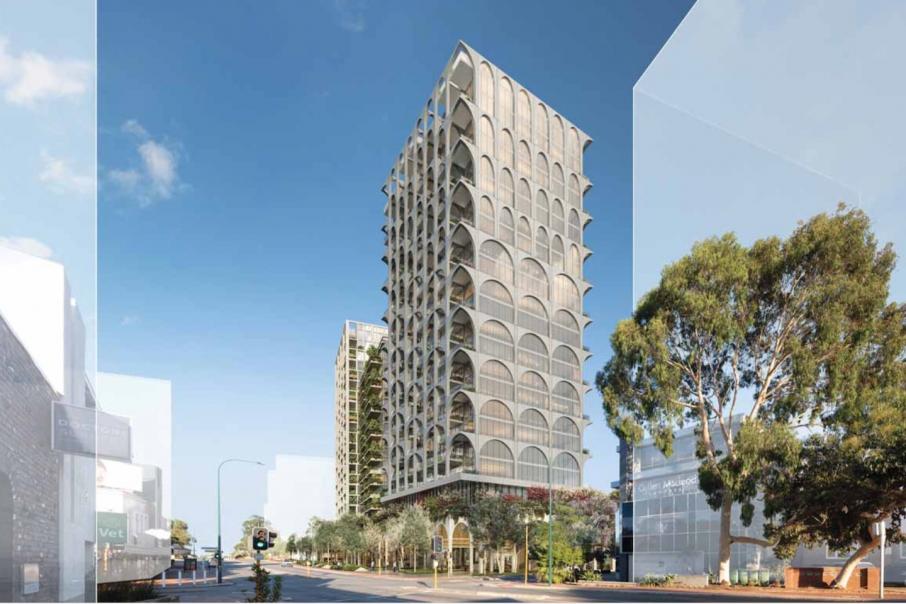 Some members of the Nedlands community have expressed their disappointment over the recent approval of a $320 million apartment development along Stirling Highway.

The Metro Inner-North Joint Development Assessment Panel held a Zoom meeting on Monday to determine whether to approve a proposal for a three-building apartment project at 97-105 Stirling Highway, known as the Chellingworth Motors site.

The panel voted three to two in favour of giving the project the green light.

The developers then lodged an appeal against the refusal with the State Administrative Tribunal and, as a result of mediation, the JDAP was invited to reconsider a revised application.

The revised development application features a reduction of total apartments from 301 to 231, and has removed one of the towers, while also decreasing the height of the remaining three.

The tallest tower proposed now stands at a maximum of 83.3 metres above natural ground level, at 24 storeys.

Within the JDAP meeting agenda, the City of Nedlands said it had received 223 submissions during the public consultation period for the proposal last November, with 10 in support of the project and the remaining 213 objecting.

Independent candidate for Nedlands Fiona Argyle said the development was unacceptable and that she would mount a fierce opposition to its progress.

“I’m out in the community and I know this is not what people want,” she said.

“We need smart and sustainable planning that is not self-serving to a few hungry developers and their stooges. We are not a neighbourhood up for grabs.”

Ms Argyle claims she was one of several residents given, what she called, rigid five-minute time slots at the Zoom meeting earier this week and that when she tried to ask questions the JDAP chair told her she could not speak and was then muted.

A Department of Planning, Lands and Heritage spokesperson told Business News deputations at these meetings were capped at five minutes per presenter and that questions were restricted to panel members only.

"As has become normal practice with online public forums, participants in JDAP meetings are muted unless they are presenting," the spokesperson said.

"The panel received 17 deputations at the meeting on Monday, and asked questions throughout the meeting of deputees to clarify matters raised.

"Panel members took all submissions and deputations into consideration, including feedback received from referral agencies such as Main Roads WA and the City of Nedlands, as well as having due regard for the local planning framework and compliance with state planning policies.

"The panel resolved to approve the application with conditions, as per the alternate recommendation in the published agenda."

One of the main concerns raised by residents, Ms Argyle said, was that the project contained numerous height discrepancies allowing unrestricted expansion.

She said she was pro-development but that current processes were ‘out of control’.

“We can’t keep trying to approve developments without the appropriate steps and systems in place. We need clearly designated ratios and height limits. The community has a right to be heard,” Ms Argyle said.

The development site falls within a zone earmarked as a future ‘landmark’ site within the Town Planning Scheme, with a clause that outlines no height control for the area.

As a result, there’s no statutory provision for height, with projects instead assessed on element objectives according to the Design WA document.

City of Nedlands mayor Cilla De Lacy said she accepted the council had acted too slowly in implementing an appropratiate local planning framework.

"Particularly a local planning policy, to guide development in the town centre while respecting the enduring values of Nedlands character," she said.

"The concept of a Nedlands town centre has been spoken about for years but honestly I think the council has been divided on whether a city like Nedlands, that is geographically diverse and more like a city of villages, actually wants or needs a town centre.

"It was probably only a matter of time before the City of Nedlands would see a development application like the one presented to the JDAP yesterday for the Chellingworth Motors site.

"For years there has been talk of how Nedlands would meet its dwelling targets for density, and how it would do so while respecting the enduring values that Nedlands has established over 150 years."

Ms De Lacy said fitting high rise into a low-density city known for its leafy, green character was challenging and that it required good design that responded to a well-articulated future development context.

"As to the merits of the development approved ... I will reserve my final judgement until it is fully constructed in accordance with plans submitted to the JDAP, is fully occupied, meets its net-zero carbon emissions commitment and delivers what the applicant’s urban designer described as a ‘hive’," she said.

Ms Argyle said other major resident concerns over the project included that it; suffered from flawed traffic assessments; gave no consideration for residential parking, public transport, taxi, pedestrian or disability access or cycle-paths; and that it failed to address wide and fundamental safety, security and sustainability issues.

“Basically, all fundamental issues are being totally ignored. There is a spectacular lack of recognition for renewable energy - certainly no solar power - and the only green space proposed is in architectural images which change from drawing to drawing,” she said.

The City of Nedlands noted the development satisfied conditions relating to sustainability, as outlined in its assessment of the project, within the JDAP meeting agenda.

The city said it acknowledged the applicant’s commitment to implement a ‘Green Star Strategy’ framework if approval was granted.

That included a range of energy efficiency initiatives to achieve a five-star ‘Design and As Built Rating’ with evidence demonstrating compliance with the design intent required to be provided at the stages of building permit and at practical completion.

A Green Star rating is an independent verification run by the Green Building Council of Australia.

In response to Business News enquiries, a spokesperson from CADDS Group energy and sustainability, consulting to the developers for the project, said the project had committed to becoming carbon neutral, through various means, including onsite and offsite renewable energy and electric vehicle charging stations, among several other initiatives.

Grange Development Consulting managing director James Dibble said there were also plans to install solar PV on the rooftops on top of the lift overrun as a means to achieve the Green Star rating.

Also included within the City of Nedlands assessment of the project, it noted there were no existing trees on the site and that the proponent had achieved the minimum standard for the required tree canopy.

The city further outlined how its consultant landscape architect had considered the proposed  2,500 square metres of planting on the structure ‘feasible’ given the proposed peer-reviewing of plant species and the strata bylaws framework to control maintenance and an annual review of the landscape proposed.

In a post on Facebook to the local community notice board, Ms Argyle said this was not a political move for her but rather about a local mum with four kids who lives two streets away from the development.

Ms Argyle said sustainable and principled planning was pivotal to her politcal campaign as the next Nedlands MP.

Ms Argyle also commented on her presence at the JDAP meeting held via Zoom.

“What I did see was government listening to six hours of development speak, and development acquired data, and listening to the community professionals for albeit.... 15 minutes,” she said in her post.

“The building will go ahead. Sadly, the developer will not implement cycle paths, or  underpasses, or plant more trees, but we will soon see three huge towers. I don't know of a comparable skyscraper anywhere from Perth to Fremantle, and there will be three of them.

“This is not about the kids on the skateboards, or the grannies on sticks and all the people who live in between. It's about a lack of rules, which allow developers to create brick monuments, with little or no sustainability, and pocket $70 million.”

Nedlands has received an influx of medium-density and apartment development applications since a new local planning scheme was gazetted in April 2019, permitting more height in designated zones, including along Stirling Highway and Broadway.