The sudden slowdown in mining construction activity will quickly flow from big companies to smaller businesses. 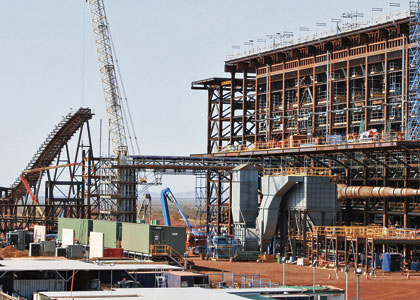 The sudden slowdown in mining construction activity will quickly flow from big companies to smaller businesses.

The past two weeks have seen a dramatic shift in business sentiment in Western Australia, as major mining companies and project developers have responded to the unexpectedly sharp decline in commodity prices.

Fortescue Metals Group has been in the eye of the storm, after suddenly cutting up to 1,000 staff and contractors and scaling back its expansion programs.

There has been plenty of speculation about the impact on other big companies, particularly Hancock Prospecting and its majority-owned $10 billion Roy Hill project.

Hancock has already invested more than $1 billion on the project but needs to finalise its debt funding before it can proceed.

By all reports, that process is taking longer and proving much more difficult than had been anticipated just a few weeks ago.

The downturn is not confined to the iron ore sector.

Coal is also hurting, with BHP Billiton and Xstrata between them cutting 900 jobs at their east coast coal mines this week.

The Queensland government’s decision this week to jack up coal royalties by $4 per tonne will only add to the squeeze facing producers, who are caught between falling prices and high costs.

The decisions taken by the big project developers will cascade through the economy.

Listed contractors such as NRW Holdings, WorleyParsons, RCR Tomlinson, Calibre Group, Forge Group and Ausdrill, which all have exposure to the iron ore sector, have already come under scrutiny.

Most contractors have said the cutbacks announced to date will not have a material impact on their business, with the main effect being a delay in the work.

Some have suggested they may actually benefit, because the slowdown will take some of the heat out of the jobs market and help them get better control over their costs.

The impact will also be ameliorated by the ability of larger contractors to pass on the pain to smaller sub-contractors.

NRW Holdings made this clear in a market update it released to the Australian Securities Exchange.

It said Fortescue’s cutback would slice $100 million off its revenue in the current financial year.

To put that in perspective, NRW is still anticipating 15 per cent growth in revenue to $1.2 billion, which is a result most businesses would be happy with – especially if they were operating in any country other than Australia, or even any state outside WA and Queensland.

NRW said it was able to mitigate any potential impact through the demobilisation of predominantly hired equipment and subcontract labour.

In other words, the hire companies and the ‘subbies’ down the line will feel the pain.

Looking ahead, the major mining companies have about two years worth of work that is already committed – though Fortescue’s recent cutbacks show that the word ‘committed’ does not mean definite.

The biggest risk for contractors is not the cancellation of other committed projects; that is unlikely.

More likely it will be the failure of planned projects to proceed. Companies like Hancock, Grange Resources, Aquila Resources and Brockman Mining have all made large investments in their planned iron ore developments.

Their pathway is now a lot more challenging and that will flow through to the contractors and sub-contractors.

The oil and gas sector continues to offer growth opportunities, especially in Queensland but once again it is difficult to see many new oil and gas developments getting under way.

As activity eases, conditions in the mining construction sector in the north of the state will gradually start to resemble the tough conditions in Perth, which is suffering from the low volume of commercial and residential construction activity.

Many builders and contractors have responded by cranking up their activity in the Pilbara, where the work has been flowing freely.

The inherent uncertainty about the outlook was highlighted this week by the flurry of speculation about the leadership succession at the very top of the Chinese communist party.

The new government in China, due to take the reins next month, was meant to be the start of China’s economic revival after this year’s slowdown. But now, it seems, we can’t even rely on the Chinese to keep the boom going.