An unlikely sector is confidently going about its business while other parts of the economy struggle. 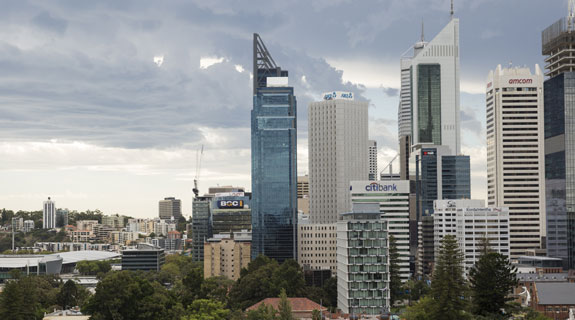 An unlikely sector is confidently going about its business while other parts of the economy struggle.

The commercial construction sector often lags the underlying economy due to the big lead times and challenges of amassing funds to go ahead with major projects.

In the early 1990s, the bust that followed the previous decade’s building boom was dramatic, and the market took another decade to recover.

But this century the cycle appears different, if the major players in the sector are to be believed.

Awkwardly, mining leaders also gave a bullish impression of where commodity prices were heading right up until they started to dramatically fall. That is an indication that industry insiders don’t always have the full picture.

Nevertheless, all types of business operate on confidence, and the positivity around the commercial construction sector will be heartening.

Perhaps their optimism is based on more recent history than that of a quarter of a century ago.

In 2008, Perth’s skyline was cluttered with cranes when the GFC hit. Fortunately for us, the crisis that hurt so much of the world was a mere short-lived blip in Western Australia. New building was suspended momentarily, but soon got started again as the resources sector quickly shrugged off economic woes felt elsewhere.

Clearly, construction players and their clients have faith in the long-term fundamentals of the market, even if such views appear fraught at the moment.

Today, many resources companies are rapidly changing their business plans; the order of the day is downsizing, putting expansion plans on the shelf and, in some cases, mothballing plant.

How can construction players seemed unfazed by that?

The truth is, apart from the rapidity of the price drop, expectations of a downturn were probably already built into the market. Furthermore, few believe such low commodity prices can last forever, even if they are reluctant to predict when things will get better.

In the longer term, Perth is now a major resources hub and the big players have to be accommodated. A few jobs might be lost but the critical mass this city has reached means investment will continue and people need to work somewhere.

That explains some of the bullishness, but not all of it.

The spate of hotels, many announced in the current circumstances, is intriguing. Again, it suggests that Perth’s population growth, critical mass as a resources hub, and importance as a destination for more than business-only travellers means more major hospitality players believe they must be represented here.

There is also the introduction of modular building, which provides some buffer from the costs that have bedevilled the sector even before the boom made building extremely expensive.

It is a sign of optimism that WA has more to offer than just mining and petroleum to draw visitors here and is willing to invest in technology and innovation to overcome cost barriers.

All of this bodes well.

It is ironic, in fact, that the private sector is coming to the rescue at a time when government is usually the one called upon to prop up industry.

Instead, the state government is coming to end of a construction binge. In the past few years it went hell for leather building infrastructure, regrettably competing for resources that were needed to expand the Pilbara’s industries and paying a high price as a result. Now it has run out of money, just at a time when some economic theorists would expect it to plug the gap through spending.

It is lucky we may not have to rely on the government in this regard, although this newspaper’s stated preference was to have kept some its powder dry rather than committing so much on capital works without recycling other assets. It has become heavily indebted and, quite frankly, panicked by the situation.

The scenes from political leaders during the past week around the inequity of the GST distribution would have not served to provide confidence for many in the business sector or the consumers they rely on.

The commercial construction sector is, by contrast, showing exactly the kind of leadership the state needs. In what appears to be level-headed thinking, it is outlining the opportunities and seizing the day.

While this newspaper remains cautious about the medium term, we also feel some of that confidence rubbing off and welcome the positive news around this important part of the economy.