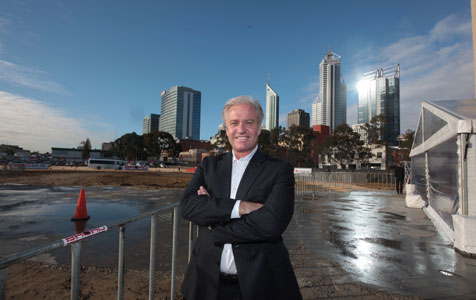 The ceremony marked the start of construction of three commercial buildings in the project, which were presold to property investor DEXUS for $434 million last month.

After the ceremony, Leighton Holdings chief executive Hamish Tyrwhitt said the project was an example of collaboration of some of the key business players in the state.

“What you’re actually seeing here today is a collaboration, a partnership, between a whole series of companies and groups, not only in the private sector but in the government sector, actually changing the face of infrastructure and the world that we live in,” he said.

As examples of this cooperation Mr Tyrwhitt listed Leighton Holdings' use of Caterpillar machinery, linking it to Westrac and Seven West Media.

He also noted that the machines used fuel provided by Shell, which has leased one of the commercial buildings in Kings Square.

Leighton Properties managing director Mark Gray added to Mr Tyrwhitt’s comments saying that the project would act as a catalyst for the revitalisation of the city.

“Kings Square is a master-planned precinct that will be the prime commercial, residential and leisure hub in the very centre of Perth,” Mr Gray said.

A Leighton Holdings subsidiary, John Holland, which is working on the project, will be relocating its Western Australian headquarters to Kings Square following the project’s completion.

Health insurer HBF is also expected to move to Kings Square, after announcing earlier this year it was looking to purchase a fourth building in the precinct.

A HBF spokesperson said today contracts were expected to be finalised within the next few weeks, with a view to moving into the completed building in 2015.

A cleansing and welcoming ceremony was also performed by representatives of the Wadjuk people, the original owners of the land on which the King Square project will be built.

King Square is part of the $5.2 billion Perth City Link project and will be the first time in a century that Northbridge and the Perth CBD have been directly connected following the sinking of the Fremantle rail line.

The three commercial buildings in the King Square project are expected to be completed by mid 2015.