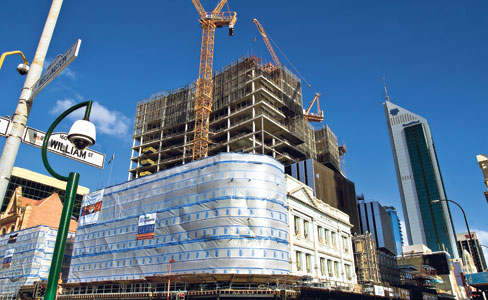 THE commercial property market in Western Australia is in a strong position despite recent weakening in industry sentiment flowing from the pullback in resources sector investments.

The key market drivers in the commercial property sector are the strong demand for office space accommodation in Perth and a tightening in supply of new office space. These factors have resulted in low vacancies for commercial office space in Perth.

The Property Council’s vacancy rate for office space in the Perth CBD was 4.2 per cent in July 2012, which is the lowest capital city vacancy rate in Australia.

Demand for office space in Perth has never been stronger. In the first half of 2012, about 158,000 square metres of new office space were taken up in Perth. This is a record for new office supplies in Perth in a six-month period. All this space was successfully leased.

Looking ahead, however, supplies of new office space are expected to contract sharply. In the second half of 2012, only 15,000sqm of new space is expected in Perth and no significant new supplies are expected in 2013.

Significant new supplies of office space in Perth are not expected until 2015.

The low vacancy rates and strong demand for office space resulted in significant growth in Perth office rents during the past 12 months, particularly for premium grade office accommodation.

Construction costs in the WA commercial sector are the highest in Australia. Recent comparisons indicate WA construction costs are 20 per cent higher for comparable new buildings in Sydney and Melbourne. It is difficult to pinpoint the exact cause of the higher costs in WA, however the competition for labour with the resources sector is a key factor.

The leasing pre-commitment market is very active in Perth, particularly around the major CBD projects, including the City Link and Elizabeth Quay.

The upgrading of older commercial buildings also presents challenges. All new commercial office developments are built to the highest standards, a factor that’s particularly important to attract a lease recommitment.  However this has resulted in a widening gap in office accommodation standards between new and old buildings.