Concerns are mounting over the future pipeline of projects as construction companies adapt to social distancing requirements and continue building. 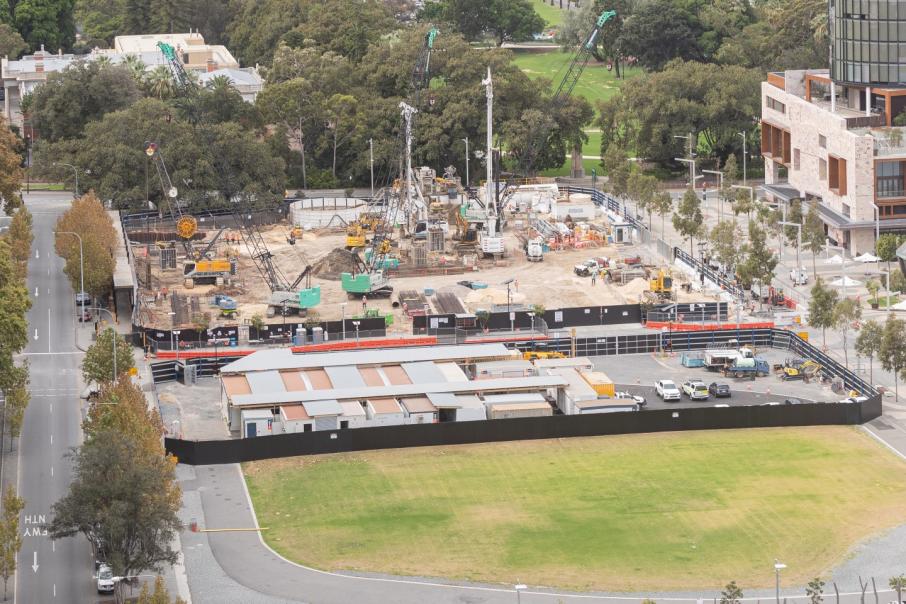 Chris Palandri says One The Esplanade hasn’t been affected as acutely as other sites, with much of the current work done by employees operating machines. Photo: Gabriel Oliveira

Concerns are mounting over the future pipeline of projects as construction companies adapt to social distancing requirements and continue building.

While Premier Mark McGowan recently declared construction as an essential activity, keeping the WA building industry’s 120,000-strong workforce in jobs, it is hardly business as usual on construction sites across the state, from single dwellings to high-rise buildings.

For detached housing, Master Builders Association of WA executive director John Gelavis said social distancing measures included just one tradesperson being allowed to conduct work on a home at any one time, while strict hygiene requirements had also been put in place.

On larger construction projects, the sharing of tools has been banned, detailed site maps have been installed to ensure workers do not complete tasks in close proximity to others, while full-time cleaners have been employed to sanitise worksites.

“There has been a big change to the way the industry operates, and the industry has responded exceptionally well to what they have had to do to keep people safe,” Mr Gelavis said.

“It has slowed progress, the process has been delayed while building a home, but we find the clients are understanding of that and they understand and appreciate that it’s going to take a bit longer because the industry is trying to remain safe and compliant.”

Multiplex WA regional managing director Chris Palandri said it had taken at least two weeks to formulate protocols to ensure construction activity could continue to be undertaken safely, a program that included extensive consultation with unions and industry representative groups.

“Our objective was to present ourselves in such a manner to state and federal authorities so they could see the industry was managing the building sites very well, such that they wouldn’t see the need to shut us down because of COVID-19 risks,” Mr Palandri told Business News.

“The first and foremost thing, we were cognisant of safety.

“We first saw this COVID thing as a bolt-on to safety and we spent a lot of time, energy and effort in making sure that our building sites were safe, and making sure they were safe for COVID.

“So it became pretty obvious early with all the protocols the government was putting in place what things we could do to ensure that social distancing was taking place and that we were doing the right thing by our staff, the subcontractors and our construction workers, to ensure that they were as safe as possible.”

Mr Palandri said protocols across the construction industry to protect workers included social distancing where possible, staggered start times, and breaks to minimise the number of people on site at any one time.

With that strict set of new safety rules in place, he said commercial construction companies were facing the same challenge as residential builders, with tasks taking longer to complete.

“The biggest difficulty has been on the high-rise projects and the taller projects, Next DC is an example, and mainly because we can’t get as many people into the lift as we usually would,” Mr Palandri said.

“It’s really about movement of people around the buildings, so if you can’t get as many people into the lift, more people are required to walk up stairs or they have to wait for the lift and the productivity goes down.

“The movement of people has probably been the biggest issue that we’ve had to deal with.”

Mr Palandri said while it was encouraging that major construction projects were continuing, there were mounting concerns around the future pipeline of work for the industry.

“The government hasn’t yet announced any major building projects that it might do, and the private sector is pulling back and will most likely have difficulty raising funding for its projects,” he said.

“There is a risk that when we come out of the other side of this, let’s say in six months’ time, that the pipeline of work has dried up.

“So buildings are continually being delivered, and that’s been terrific, but if there is nothing starting, in six months’ time we could end up with very little work happening in the industry.”

“The feedback we are getting is that residential builders, a lot of them have work for the next few months, but towards the end of September is when there will be potential issues,” he said.

“There seems to be a pipeline of work in the system for two or three months.

“Our concern is what happens after that, particularly if that whole JobKeeper program concludes towards the end of September.

“That’s why we are calling for an increase in the first homeowner’s grant to $40,000, just for six months, to build a pipeline of work for residential builders.

“They are already spent over the forward estimates, so bring them forward and start now.”

Mr Graham said the timing was right to accelerate project pipelines, while it would be crucial to ensure that any infrastructure stimulus was structured in such a manner that a wide range of building companies could participate.

“Now more than ever, we need to look after our own,” Mr Graham said.

“We’ve already seen too many government projects bundled up into large packages to suit the big internationals, leaving local companies to fight over the crumbs.

“Our message to government on behalf of WA’s contractors, consultants and suppliers is: ‘We’re here, geared up and ready to deliver an accelerated program of essential infrastructure projects.”