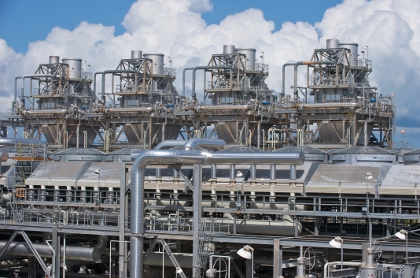 Energy giant ConocoPhillips coud become the second company, after Japan's Inpex, to transport gas from a field off the Western Australian coast to an LNG processing plant at Darwin.

Conoco's Australian business unit president Todd Creeger said today the company could run a new gas pipeline all the way to its LNG facility at Darwin from the Browse Basin, off the Kimberley coast.

He said Conoco, the third largest energy company in the United States, was very interested in adding another LNG processing train to its Wickham Point facility in Darwin.

Mr Creeger said the Darwin plant, which has current output of 3.2 miliont tonnes per annum, was authorised for 10 million tonnes.

"We have obviously got room for another train, both from a layout footprint standpoint and permits," Mr Creeger told reporters at a conference in Darwin.

He said a single gas field had so far not been found that could underpin the building of a second processing train but that the Browse Basin could alter this.

"Potentially the Browse Basin drilling that I talked about earlier that is going on now could underpin a second train, and we will know within a few months whether that is going to be successful," Mr Creeger said.

"One of the pipeline options would be a pipeline paralleling the Ichthys (pipeline).

"If you look at the Inpex line, we are about another 100 kilometres further (along)."

The $US34 billion Ichthys project, run by Japanese company Inpex, involves an 820km gas pipeline from the Browse Basin to Darwin.

Inpex opted for a Darwin LNG plant after failing to secure environmental approvals from the former WA Labor government for its preferred site near the Kimberley coast.

Mr Creeger said another option would be for gas from its operations in the Browse Basin to be piped to its existing Bayu-Undun facility, 500 kilometres away in the Timor Sea, which currently supplies the Darwin LNG plant.

"Browse could easily flow up into the field at Bayu-Undun. The gas could be processed and then shipped onshore, too," Mr Creeger said.

He said ConocoPhillips was in talks with several parties interested in buying a stake in its Australia Pacific LNG (APLNG) joint-venture project in Queensland.

Both ConocoPhillips and Origin Energy, which each hold a 37.5 per cent stake in the $US20 billion ($A19.22 billion) project, say they each want to offload 7.5 per cent of their equity in the project.

With BG Group recently stepping back from its plans to sell a stake in its Queensland LNG project, amid market concerns about cost blowouts and labour challenges, there had been speculation that ConocoPhillips and Origin may struggle to sell a combined 15 per cent of APLNG.

Mr Creeger said his company had not encountered the same problems and there was "lots of interest" from parties.

"I think there are a lot of dialogues going on right now," he said.