It’s clear Labor will target Perth traffic congestion and the disruption caused by major works as an election issue. 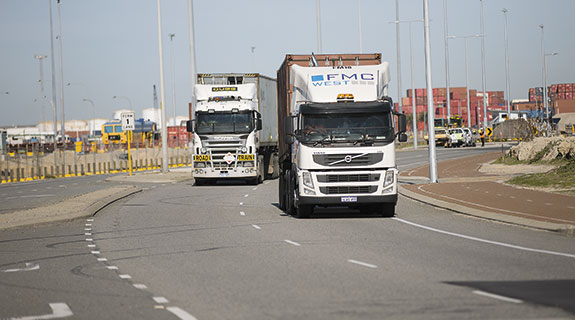 Transport Minister Dean Nalder has reacted strongly to claims that the government has been sitting on its hands, despite promising to launch a concerted assault on traffic congestion in the metropolitan area during this current four-year term.

He says a record spending program is under way to get on top of the congestion challenge, which intensified as an issue during the height of the recent resources boom, during which time the state's population grew by an average of 1,000 people a week.

The minister was responding to criticism in last week's Political Perspective that the government has been derelict in tackling clogged roads at peak hour, having placed the heavily promoted MAX light rail project – to link Mirrabooka to the city and extending to the University of WA in the west and Curtin University to the south-east – on the backburner.

In fact after Mr Nalder's recent visit to Singapore, it appears the light rail project is receding further, being replaced by a dedicated and cheaper bus lane link to the city. The money saved could be used on other streamlining programs.

Mr Nalder, who inherited the portfolio when Troy Buswell was forced to stand down early last year, has the responsibility of ensuring that the transport issue is defused before the next election in March 2017.

"There is a lot going on," Mr Nalder told Political Perspective.

"In fact the $1 billion Perth Gateway project at the airport is rapidly nearing completion, coming in ahead of time and under budget. We will have a soft opening in September, four months ahead of the planned official opening, resulting in a saving of $45 million, which can be allocated to Roe Highway modifications."

He also pointed to major improvements involving with the Roe and Tonkin highways in the north and east, and the controversial freight link to the port of Fremantle, which will disturb wetlands, angering conservationists. The container route between Fremantle and the Kewdale depot has been a major headache for successive governments.

Mr Nalder raised hopes by suggesting a tunnel under residential areas around Fremantle might avoid much of the threatened surface disruption to existing housing and roads. An answer is still months away.

And the government is targeting less-costly options as well as the big-ticket road projects. Adding an extra lane to the Northbridge tunnel has been effective; now freeway on ramps are being tackled to prevent bottlenecks as motorists entering the freeways attempt to merge ($8.5 million has been allocated to repainting lanes to assist merging).

One of the government's dilemmas is that, while it's trying to solve city traffic bottlenecks, the road works actually cause further delays, testing the patience of motorists.

Extending the Joondalup line to Butler counters Labor's claim that the Liberals do not build suburban rail. So will the planned airport link off the Midland line to serve the marginal seats of Belmont and Forrestfield. It could be the start of a loop line to Thornlie and on to Cockburn.

But all this doesn't impress opposition Leader Mark McGowan.

"Perth's congestion crisis has got worse under this government and the city is heading for a disaster unless we act now," Mr McGowan said.

"This means, getting more people out of their cars and onto public transport.

"The government's track record on public transport has been abysmal and plagued by massive broken election promises. The 'fully funded, fully costed' election promise turned out to be a lie and, as a result, the MAX light rail has been added to the scrap heap, along with the Ellenbrook rail link. Who knows when we will see a rail line to the airport?

"The $1.6 billion Perth freight link will also put thousands more big trucks on the roads in the southern suburbs. This freight should be put on rail so trucks are taken off the road; and we should start planning for a new container port in Kwinana so trucks don't have to travel through residential areas.

"What Perth needs is a plan for an integrated and co-ordinated transport network. The Liberals don't have one. Colin Barnett has ruined the state's finances, so building more rail is going to be difficult, but it's also clear that we can't afford not to do it."

And it's also clear that transport will be a major area of differentiation in the election countdown. The government will be assessed not just by the problems caused by trucks on the periphery of the metropolitan area, but also by the gridlock around the city at peak hour when there are sell-out events at the Perth Arena, the Perth Convention and Exhibition Centre, and Domain Stadium at Subiaco.

Both sides want more passengers on public transport, but Perth people have traditionally been wedded to their cars. Facilitating a divorce is Mr Nalder's big challenge.