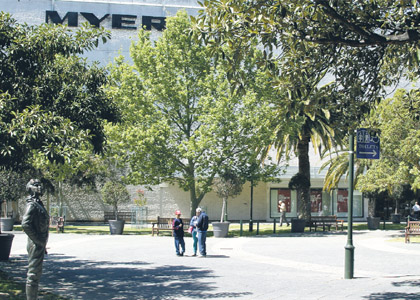 THE City of Fremantle will hold an international design competition to appease the concerns of local residents over the architectural style of the planned $220 million redevelopment of Kings Square.

The city said it would now attempt to assuage residents’ concerns over the design of buildings shown in architect’s renderings of possible developments released prior to the public consultation period.

Details of the design competition, which will cover the council offices and library, will be subject to a separate planning committee report.

The plan is centred on a redevelopment of the Myer building into commercial office space, with the department store having vacated the premises after ceasing trade in the past fortnight.

A number of city-owned sites will also be redesigned under the proposal, including the vacant Spicer site, as well as the Queensgate Centre and Queensgate Car Park, which will be sold to Sirona.

Sirona has pledged to retain at least 500 bays for shopper parking at the Queensgate car park.

Sirona Capital managing director Matthew McNeilly said the redevelopment had the potential to deliver a major economic boost for Fremantle.

“Our intention is to continue to work with the city to deliver a coordinated development approach to Kings Square, activating the area through a mix of retail and office space, and providing an important social and commercial hub in the heart of Fremantle,” Mr McNeilly said.

In response to concerns regarding a lack of residential development in the current proposal, the council said housing remained a possibility, although its preference would be for a hotel facing the town square.

The council also amended the original proposal to set aside the Spicer site for affordable housing development.

The redevelopment is part of a wider effort to improve the Fremantle CBD, with council aiming to add 20,000 square metres of retail area and 70,000sqm of office space to attract more people to live and work in the port city.

“This is also a major turning point for the viability and vibrancy of the Fremantle CBD,” Fremantle Mayor Brad Pettitt said in a statement.

“This development will not only provide an integrated development of high-quality retail and office space but will also be a catalyst for the future redevelopment of other non-heritage parts of Fremantle.”