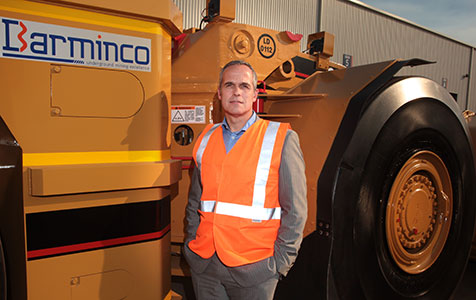 Some might say Peter Stokes joined Barminco at the worst possible time.

When he started as chief executive in February, the mining contractor was still dealing with the legacy of its overly-fast growth in 2010 and its failed IPO in 2011.

It had large debts to refinance and was facing a weak market.

But the former geologist and Linfox executive is happy to be back in his hometown with an opportunity to shape the Barminco business.

And with the completion last month of a $US485 million refinancing in the US, Mr Stokes is positive about the prospects.

"The business had been going through challenging times with a couple of very onerous contracts," Mr Stokes told Business News.

"This year has been very successful for the business, we will double the profitability from last year."

Facing off against Barminco is arch rival Byrnecut, whose long-serving managing director Steve Coughlan said the current challenges facing the sector were nothing new.

"We are continually working with our clients to improve productivity and reduce unit costs," he said.

Mr Coughlan said Byrnecut is already looking to the next upturn.

"Having been through the 87 crash, the Asian financial crisis, the GFC and now the current downturn, there appears to be a roughly five-year cycle," he said.

"So we have seen it all before and it will turn again.

"What is not in doubt is the Chinese and other BRIC (Brazil, Russia, India and China) economies will continue to grow, so now is the time to consolidate and prepare for the next upswing."

It generated global revenue of $912 million in 2012, putting it slightly ahead of its main rival.

Barminco achieved a big jump in total revenue of $885 million in the 2011-12 financial year after taking on several new gold mining contracts.

Mr Stokes acknowledges that the rapid growth caused a few issues for the company.

"Adding big contracts in a short period of time is always a challenge. If you try to grow too quickly, you get very skinny on the deep expertise that you need," he said.

Mr Stokes said annual turnover would drop to about $825 million this year, in part because of mine closures, but the company aimed to turn that around with structured growth.

"We need to bed down a strong team and get on with growing the business again, and get well over a billion dollars in revenue in the next few years," he said.

One of his medium-term goals is to get the business ready for a stock market float, which would allow private equity group Gresham to cash out its majority shareholding; but there is no pressure.

"In two years we might look at it again, but if the market's not right, we just won't do it, and that five-year bond gives us that flexibility," Mr Stokes said.

He said the five-year term for its debt refinancing, the light covenants, and the inclusion of extra funding for expansion was a critical step for the business.

"That now gives us five years of financial security in the business and lots of headroom to grow."

"I have a cynical view of private equity controlled businesses generally," he said of Barminco.

"They ramped the business to sell it off but got caught out and now have to manage themselves out of it. The debt is still there and the men in suits will still be looking over Peter's shoulder."

The perennial challenge shared by Byrnecut, Barminco and other mining contractors is to convince owner-miners they offer a better value proposition.

Their cause is not helped when Bill Beament, who used to run Barminco's operations, talks up the savings he has achieved since turning gold producer Northern Star Resources into an owner-miner.

"On the investor road trip in the US we had a lot of questions about that (Northern Star)," Mr Stokes said.

He agrees that some mines make more sense as owner-miner operations; this can include mines where the owner can focus intensively on a single operation.

Mr Stokes said the best results came when they worked closely with their clients.

"We work in a long-term alliance with AngloGold Ashanti, we're integrated into their business, we have people in their planning area and all through the business," he said.

He believes the big contractors have better buying power than most miners.

"We've got a fleet that we're continually building up, they can't compete with that."

That also gives the contractors a lot of flexibility.

Mr Stokes said that, as part of its refinancing, it commissioned independent research that found contractors had won increased market share in underground mining.

"There is a clear move in the underground sector," he said.

"In last five years or so there has been a 5 to 10 per cent swing from owner-operator to contract mining.

But he doesn't play down the challenges facing the sector.

"If the contractors don't continue to innovate they will lose their competitive advantage," Mr Stokes said.

"We have some very strong competition, particularly from Byrnecut, who are good innovators, so between us we're always pushing ahead."

Mr Coughlan said the pressure on miners to reduce costs could play into the hands of contractors.

"The current situation may focus owner miners to reconsider the use of contractors to reduce costs and de-risk their cash profile," Mr Coughlan told Business News.

Mr Stokes cites his experience with Linfox to support the case for contracting.

He said supermarket operators used to run their own trucking fleet until Linfox boss Lindsay Fox demonstrated he could run logistics more efficiently.

In recent years, Linfox has diversified its business into the resources sector in Western Australia, with clients including BHP Billiton, Chevron and Fortescue Metals Group.

"I've always had a passion for mining and 20 years later, to come back into it, was a great opportunity."

Byrnecut and Barminco don't have the underground mining sector to themselves.

NSW-based Pybar is a significant competitor, and local firm GBF added to its work by winning the underground contract at Doray Minerals' Andy Well gold mine.

Some of the big open-cut miners, such as Macmahon, also have underground contracts.

Barminco earns about 20 per cent of its revenue in Africa, through a contract it holds in Egpyt and through its 50 per cent share of African Underground Mining Services, jointly owned by Ausdrill.

Mr Stokes said the joint venture would continue to focus on countries including Mali, Ghana and Burkina Faso, while Barminco will target Tanzania, Namibia and Botswana in its own right.

"There is a lot of growth opportunity there," he said.

"A lot of it is driven from here, it's almost all WA-based companies.

"They're doing a great job, taking knowledge from the Goldfields and applying it over there."

International growth is also important for Byrnecut, which currently has six international contracts, including in South Africa, Mali, Ghana, Kazakhstan and Saudi Arabia.