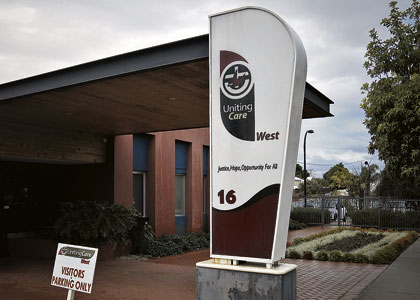 A PREEMINENT scholar in the field of theology and economics has warned that faith-based organisations such as Anglicare and UnitingCare West will cease to exist unless they move to maintain and improve their connections to the church by better identifying ‘mission and identity’.

“The government, as well as the churches, should be very concerned about the loss of the Christian identity.”

In recent years there has been a trend across Australia toward state and federal governments contracting out community services to non-government organisations.

Professor Oslington is cynical in his assessment of this practice, suggesting it is little more than a bid to save money by transferring cost to a sector that’s nimble and cost-efficient, largely by virtue of tight budgets and large client lists.

“You’re cheap, that’s why the government likes to deliver services through your organisations,” he said.

Professor Oslington said one of the reasons community sector service delivery was cheaper than that of the government sector was that wages were 25 per cent lower in the former.

The government is the dominant customer of community sector services, he added.

“The government is the monopsony purchaser of social services; it is just basic economics that the government is able to drive the price below what would exist in a competitive market for those services,” Professor Oslington said.

“If you are cheap because of exploitation of monopsony power, that is not an efficiency gain.”

He said the current contractual arrangements would not be sustainable if the mission and identity of faith-based organisations was lost and suggested the government would have an “awfully big problem.”

“The government was frightened when it funded schools back in the 1960s that all the kids from Catholic schools would come into the public system and the system would collapse. That is nothing compared to what would happen if the church-related social services sector gradually collapsed,” Professor Oslington said.

He suggested four actions be taken to improve the situation.

The first was to establish how the organisations were related to the church.

“If we are talking about what these organisations are in relation to the church, then that should be reflected in the legal relationships between the organisations and the churches they are related to,” Professor Oslington said.

“It is my contention you will not be able to motivate your staff and continue on the way you are unless you can articulate clearly what you are in relation to the church.”

Secondly, he thought the government needed to fund the maintenance of organisations’ ongoing ‘mission’, namely their social and religious role.

“There is no reason for the sort of squeamishness for the government funding anything that smells slightly of religion,” Professor Oslington said.

Thirdly, the right to appoint properly informed, properly educated Christian people to senior positions was imperative for the mission and identity of faith-based organisations to survive and thrive.

“There has to be a critical mass of people who understand what nourishes Christian service organisations at the upper levels for it to work in the long term,” he said.

“Typically you are choosing between someone who has all the skills that are necessary to run a large, complex organisation and someone who has the appropriate theological, spiritual formation,” Professor Oslington said, adding that because religion was separated from university education in the mid 19th century, it was hard to get people with a combination of the two skills.

“What we desperately need is places in our education system where people can be properly formed and theologically educated as well as getting the skills that are needed in running a large and complex organisation,” he said.

It partnered with the community sector to come up with a plan for reforms, and allocated $604 million additional funding in the 2011 budget to procuring community services.

Last week’s forum was co-hosted by Anglicare and attended by organisations including Uniting Outreach Busselton and UnitingCare West.

Anglicare WA chief executive Ian Carter said the organisation had engaged in an evolving dialogue around its religious foundations.

“The most critical thing for me is that we aren’t about baptising or nurturing new believers, or teaching the Christian faith, that is not what we exist for,’’ he said.

“We are a charity, we are open to all people, and that is an absolutely critical part of our future. We acknowledge those historical connections and the role the church played in that, but we have to continue to portray ourselves in such a way so that people are aware that we are open, non-discriminatory to all people and we will work alongside them.”