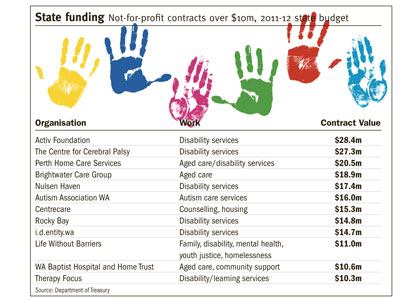 Outsourcing of state services through public-private partnerships may be a politically touchy subject but the Western Australian government has made significant progress in this field this year, across a variety of areas.

A standout deal was one made between the community sector and the state government which has been widely viewed as a positive development.

More than $600 million was added to the state’s contribution to the ‘fourth’ sector to be directed to sustainable funding and contracting, taking the total to more than $1 billion.

Under the deal, the state is keen to ensure community sector players have the financial muscle to deliver services, which might otherwise fall back on government agencies.

The deal follows years of collaboration between the government and not-for-profit organisations in what is referred to as the Partnership Forum.

Not-for-profit leaders like former Uniting Care West chief executive Chris Hall and Senses Foundation chief executive Debbie Karasinski have worked with the government to develop a strategy to increase social services provision in WA in partnership with the state.

But diminishing government funds, growing costs, stretched human resources, rigorous departmental compliance structures and the lack of a clear understanding of the sector by government had resulted in a gap in disability, mental health, housing and various therapeutic services.

“One of the biggest outcomes of the whole process is the initial funding that will come through not for profits so we can be sustainable and ensure we can access monies to ensure a good level of governance, risk management and proper wages for our staff,” disability services organisation Rocky Bay chief executive Michael Tait said at a WA Business News forum on the subject before the budget announcement.

The funding was awarded with little direction on how it should be spent, which was a positive outcome for not for profits, particularly considering Fair Work Australia ruled in favour of an Australian Services Union case that pushed for pay equity between the not-for-profit and public sectors this year.

The deal was a win for the state government, as it meant delegating a portion of its service provision to organisations with expertise in their fields, the obvious benefits of which flow on to those individuals receiving services.

“The government has targeted spending in this year’s budget to provide quality services and improve the way they are delivered to those most in need throughout WA,” treasurer Christian Porter said when announcing the budget.

The Barnett-led Liberal government has shied away from the term privatisation when it comes to corrective services, but the five-year contract, with potential for a 10-year extension, awarded to multi-national private security firm Serco earlier this year tells a different story.

Serco, which manages and operates seven federal government immigration detention centres, including those at Christmas Island and Northam, was awarded the contract to provide prisoner transport, court security and custodial services in WA.

Adding to that landscape is the tender for the design, construction and maintenance of the 350-bed prison set for Kalgoorlie.

The Kalgoorlie prison will remain government-owned and operated.

The $360 million Midland Health Campus development is another project that has bolstered the number of public-private partnerships in WA.

This project will be designed, built, operated and maintained by builder Brookfield Multiplex and St John of God Healthcare, which will be responsible for both clinical and non-clinical services.

The not-for-profit organisation was one of two short-listed bidders for the project alongside listed company Ramsay Health Care, which operates Joondalup Hospital in a similarly fashioned relationship with the government.