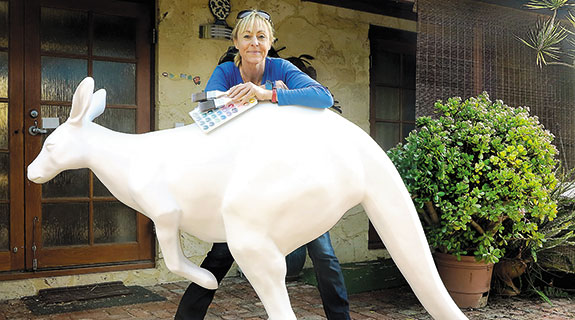 HOP TO IT: Wendy Binks will paint her kangaroo to join 19 others along the Forrest Highway. Photo: Miami Bakehouse

KangaART hopping to make a mark

FREMANTLE artist and proprietor of Stunned Emu Designs, Wendy Binks, will join several high-profile Western Australians in decorating 20 fibreglass kangaroos soon to be installed along the Forrest Highway in Myalup, between Mandurah and Bunbury.

The kangaroos are part of a project called KangaART, being organised by Miami Bakehouse, to mark a new tourist attraction and draw attention to its first drive-through restaurant.

A spokesperson for Miami Bakehouse said more than 5.1 million cars travelled along the Forrest Highway each year, and KangaART was designed to be a tourist destination and memorable experience in WA’s South West.

Several Perth identities will paint their kangaroos onsite at Central Park and Enex 100 in Perth’s CBD on Monday June 15 and Tuesday June 16, with artwork to remain on show in the city until Friday June 19.

All stars with a Youth Focus

“The funds raised by the Swish Classic will allow us to provide long-term, therapeutic one-on-one counselling to more than 30 young West Australians at risk of suicide or struggling with depression, anxiety or self harm,” she said.

LIFELINE WA has launched a free financial counselling service to support people and families work through the stress created by debt and financial hardship.

“People experiencing a financial crisis are at higher risk of suicide,” she said.

“Through the provision of financial counselling, Lifeline WA aims to encourage people in distress to seek help and for those around them to reach out in support.”

The service, which can be accessed by calling Lifeline, will offer direct case work and one-on-one intensive support to the wider Perth metropolitan area.

Ms Kalif said Lifeline anticipated more than 500 people would use the service in its first year.

OZHARVEST, a major Australian food rescue organisation, has delivered more than 176,000 meals to 40 charities across Perth since opening a base in Western Australia in December last year.

Since 2004, OzHarvest has grown to now operate in seven locations across Australia, including Perth, collecting excess perishable food from commercial outlets and delivering it to nearly 500 charities, which serve it to vulnerable men, women and children.

OzHarvest WA state manager Jennifer Keen said the Perth unit had been involved in the Night Noodle Markets, Taste of Perth Festival and held several Cooking for a Cause classes.

“We have two vans on the road, two drivers and two full-time staff, but it’s our amazing yellow army of volunteers that really keep the wheels turning,” Ms Keen said.

OzHarvest has also recently launched its nutritional and educational program, Nest, and is preparing to hold its Think.Eat.Save event in July presenting information and activities on how to fight food waste.