AN Aboriginal community has come up with a new spin on the board game Monopoly to help job seekers with low literacy and numeracy levels learn how to manage work and money. 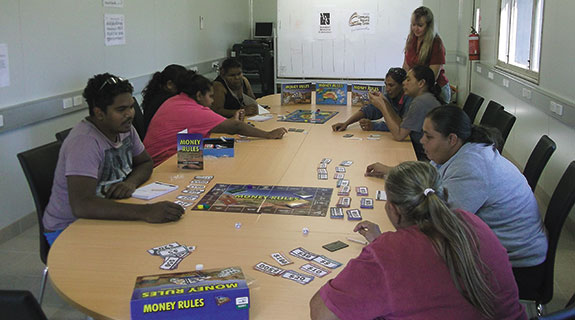 AN Aboriginal community has come up with a new spin on the board game Monopoly to help job seekers with low literacy and numeracy levels learn how to manage work and money.

The game was developed by the Pilbara-based Ashburton Aboriginal Corporation after members of its registered training organisation recognised a more creative approach was needed to teach life skills to Aboriginals with little formal education.

Ashburton business development and sales manager Gary Chesson told Business News the game had to appeal to an audience that could immediately grasp its concepts and have fun with it, or it wouldn’t work.

“There is a monster problem in Australia, not just with Aboriginal people but many people with below acceptable levels of language, literacy and numeracy,” Mr Chesson said.

“We had financial literacy training packages, but we wanted something that was a bit more relevant and easier for people to get the gist of, because we’re dealing with people that sometimes English is their third language and have had no proper education whatsoever, or very limited exposure to it.”

The game, called Money Rules, has been more than four years in the making.

At one point the idea of decorating the board with Aboriginal art was discussed, but the complexities of copyrights and royalties proved too complicated.

Instead the finished product is simply designed and operates similar to Monopoly in that users throw two die and move forward around the edges of the board, receiving pay in the form of notes when they pass ‘Go’ and picking up ‘good’ witchetty grub cards and ‘bad’ roadkill cards along the way.

Roadkill cards list bad news such as the loss of a job and the need to go on the dole, while witchetty grub cards list good outcomes such as receiving a tax refund.

While players pick jobs at random in the beginning, there are chances throughout the game to pick up new jobs and there is even a Russian Roulette square where players can choose to gamble earnings.

Players have to ensure their expenses don’t exceed their income, which can go up when they change jobs or down if they lose their job or blow the budget.

“They don’t even realise the subliminal learnings that are going on in the meantime from looking at the cards and realising ‘if I’ve got a better job I get more every time I pass Go’,” Mr Chesson said.

“They aren’t going to change overnight so we need to use repetition and fun, and that’s what Aboriginal people enjoy.”

GCM Advisory director Simon Haigh said after being approached by Ashburton to help market the game, GCM had advised that the market was larger than they first thought.

“We’ve ... said to them that they shouldn’t keep their horizons in Australia, they should look at overseas,” he said.

THREATS to abolish the body responsible for regulating the national charity sector have been allayed after last week’s federal budget.

Established by the Gillard government, the Australian Charities and Not-for-profits Commission will instead receive more than $55 million over the next four years.

In recent weeks, Social Services Minister Scott Morrison had appeared to deliver a stay of execution for the commission, which his predecessor, Kevin Andrews had wanted to replace with a ‘centre for excellence’.

As part of its role, the ACNC determines and registers charities, provides support and education to the not-for-profit centre, and aims to improve the transparency and accountability of the NFP sector.

Last month, it published the financial information of more than 23,000 registered charities.

“For the first time members of the public have been able to search a register to see if a charity is indeed registered, and then find out what it does, where it operates, the people who run it, the rules it needs to follow, and now, its financial information,” ACNC commissioner Susan Pascoe said.

Meanwhile, public health and NFP sector workers have lost fringe benefit tax exemptions for meal and entertainment expenses as part of a crackdown in the federal budget.

The move is expected to save the government $295 million over the next four years by capping benefits under salary sacrificing packages to $5,000 per person.

Budget papers described the changes, which will take effect from April 1 2016, as a way to improve fairness in the taxation system.

Workers who, for example, live in Perth and fly to work in the Pilbara will no longer be eligible for the zone tax offset that essentially provided compensation for the disadvantages of working in remote areas.

THE Salvation Army’s Red Shield Appeal has received an early boost, with a $60,000 donation from the state government.

The Salvos annual doorknock will be held on the weekend of May 30 to 31.

Premier Colin Barnett said he recognised the Red Shield Appeal was an essential fundraising campaign that allowed the Salvation Army to continue its work across the state.

“I encourage all West Australians to give generously to the Red Shield Appeal,” he said.

The appeal will provide funds for the Salvos’ homelessness services, meals for the hungry, services for women fleeing domestic violence, and its emergency services for disaster-affected situations.

The doorknock appeal, which is now in its 50th year, is aiming to raise $9.5 million nationally.

The student films, to be produced by the WA Screen Academy, are typically fully funded by the university.

“Crowdfunding is taking off as an effective, alternative way of financing screen content,” she said.

“It appeals to young people, is accessible to all and can bring in relatively large sums of money.”

“Most people who donate funds to help a project get made will be interested in seeing the film when it’s released,” she said.

The four crowdfunded films will screen at Luna Palace Cinemas in Leederville later this year and in film festivals around the world.