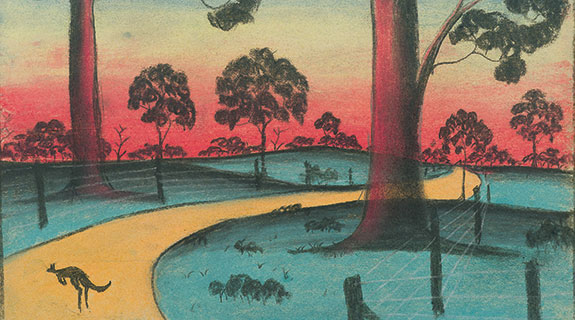 THE stories behind the art that was created amid the forced removal of Aboriginal children from their families during the late 1940s will be heard following the presentation of a Lotterywest grant.

People familiar with the art created by the Carrolup artists in the Great Southern region will be interviewed as part of a $130,000 project made possible by the grant.

The art, which was found by chance in 2004, has been placed into the care of Curtin University.

Researchers and a film crew, including an assistant from the South West Aboriginal Land and Sea Council, have been employed to collect knowledge surrounding the 122-piece Herbert Mayer collection.

Curtin vice-chancellor Deborah Terry said unearthing the history would enable the university to better understand a significant part of the state’s story. She described the project as important and urgently needed, as few people remained who could provide stories and experiences about the art.

“As well as providing an important resource for building cultural and historical knowledge, it will reconnect the paintings to the artists and their families,” Professor Terry said.

SCITECH has been recognised for its dedication to encouraging Western Australians to participate in science, technology, engineering and maths with an international youth science award.

The Knowledge is Power award was presented as part of the not for profit’s work with the annual Beijing youth science creation competition.

Since 2006, Scitech and Rio Tinto have sent two Pilbara students to Beijing each year to take part in a Beijing Bound science competition.

Rio Tinto general manager communities Robyn Sermon said the miner was proud to partner with Scitech and give regional students similar experiences to those available to metropolitan students.

Scitech chief executive Alan Brien said the award recognised its ability to use science to connect with and inspire students, as well as empower and resource teachers and build the general public’s knowledge.

The Perth centre will be used as a training and work experience hub for young and unemployed people, as well as serve as the headquarters for producing thousands of affordable frozen meals for disadvantaged Western Australians.

Purpose-built food warehouses in Albany, Geraldton, Bunbury and Kalgoorlie-Boulder have also been funded through the $6 million contribution from the Department of Local Government and Communities and $6.3 million from Lotterywest grants.

Premier Colin Barnett said it was predicted Foodbank WA would provide 6.5 million meals to disadvantaged people by 2020 and the government was keen to support its work.

“I have been particularly impressed with the school breakfast program, which makes sure more than 17,000 children at 430 schools right across the state get a wholesome, nutritious breakfast on a regular basis, helping kids to get off to a good start for the day,” Mr Barnett said.