The construction sector is meant to be in a protracted slump, but that’s not the message coming from contractors in WA. 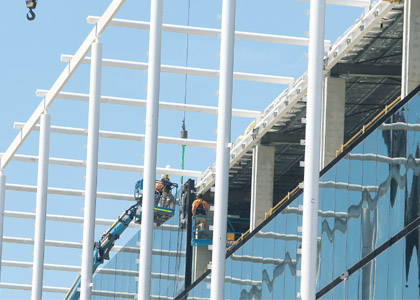 NEARLY FINISHED: The $240 million WorkZone project on Pier Street will be the home for Leighton Contractors on completion, scheduled for September. Photo: Bohdan Warchomij

The construction sector is meant to be in a protracted slump, but that’s not the message coming from contractors in WA.

CONVENTIONAL wisdom among many economists is that last year’s slump in mining projects has already washed through the construction sector.

The purported slowdown in construction was evidenced by the Australian Industry Group’s most recent performance of construction index for January.

The index has been below 50 points (that separates expansion from contraction) for 32 consecutive months, and the weakness has been across sectors - houses, apartments, commercial and engineering.

While homebuilders in Western Australia might share that sentiment, construction companies in other sectors are still reporting a healthy volume of work.

The deferral or cancelling of some big iron ore projects has taken some of the heat out of the WA market but that has been outweighed by the scale of committed spending in the resources sector and the state government’s record capital works program.

Broad Group chairman Peter McMorrow oversees a business with about $600 million of work in hand, which he described as a healthy level.

“This provides us with a good base from which to continue our growth strategy,” Mr McMorrow told WA Business News.

Mr McMorrow sees good potential for Broad to continue expanding nationally, helped by the backing of its owner, Leighton Holdings.

“The national outlook is positive with the east coast of our business upholding a consistent return,” he said.

Mr McMorrow said competition for projects and quality staff would continue at a high level.

“Competing for good quality staff and subcontractors and suppliers is a constant challenge,” he said.

Other construction companies tell a similar story as they look to diversify or find niches where they do not have to compete on price.

“Some projects offer opportunities for innovation and a chance to do something different; we want to do those,” Mr Iancov told WA Business News.

Like most of the larger construction companies in WA, DORIC has also diversified into the resources sector, which created a new set of challenges.

“In Perth, building is the core competency,” Mr Iancov said.

“In the north, the construction is simple. Logistics is the challenge.

“It was a learning curve for us and for everybody else.”

Regional manager western region Adam Harry said he had not seen any impact at this point from the slowdown in iron ore projects.

A major challenge for the industry and for government is their ability to secure funding for infrastructure projects.

However, Mr Harry believes John Holland is in a strong position.

One of its newest contracts is a public private partnership for the development of the 350-bed Eastern Goldfields regional prison.

It won this work as part of the Assure Partners consortium, which also includes Pindan Contracting, Capella Capital and Honeywell.

The value of the construction contract was $232 million, but after adding in prison maintenance the total contract value increased to $372 million.

Brookfield Multiplex, which competes with John Holland for the title of WA’s largest construction contractor, has also secured a PPP project.

It teamed up with St John of God Healthcare and architects Hassell to win the contract for the design, construction and operation of Midland Health Campus.

Health has been the hottest sector in WA’s building construction market, and Brookfield Multiplex and John Holland have been the dominant contractors.

Between them they have won eight of the 20 largest building construction projects in the state.

Multiplex has more than $2.5 billion of building construction projects, led by the Fiona Stanley Hospital project and the associated State Rehabilitation Centre.

John Holland is not far behind, with more than $2 billion of building construction work under way.

In the resources sector, John Holland won a contract to develop the accommodation village at the Wheatstone gas project.

In the engineering construction sector, its major projects include the City Link development and the Esperance port access corridor.

The combined value of all of its projects across the state is close to $4 billion.

Its other long-term contracts include developments at BHP Billiton’s Jimblebar mining hub in the Pilbara.

DORIC is also engaged in the design of a major redevelopment at the HMAS Stirling naval base near Rockingham, with construction due to commence next year.

Hanssen has four major apartment projects underway that are being developed by Finbar.

They include the Adagio and Au apartment towers in East Perth, and the Pelago East project in Karratha. A fifth apartment project set to commence construction this year is Spring View Towers in Rivervale.

Broad Group continues to be a major player, with the WorkZone building in Pier Street nearing completion and four building and civil projects under way at Perth airport.

It also has a growing portfolio of civil projects, such as the development of Elizabeth Quay, which it won jointly with Leighton, and a remote indigenous housing program.

Looking ahead, Leighton Properties has selected Broad as preferred contractor for the KS2 office building in Kings Square.

Built Environs was one of the big winners over the past year, winning two very substantial contracts.

In January, it was contracted by Perth Airport to build the new domestic ‘pier’ that will be home to Virgin Australia, and to expand the international departures area.

Perth Airport described this as the main construction contract for the largest component of the airport redevelopment. The total value of the project is over $330 million.

It adds to work Built Environs is already undertaking at the airport on construction of a new logistics yard to service the international and domestic terminals.

The firm’s second big win came when AMP Capital selected it as builder for the $105 million expansion of Ocean Keys shopping centre.

Another smaller project it is undertaking is a $12 million medical centre in West Leederville.

Its local wins come two and a half years after Adelaide-based Built Environs lifted its WA presence by purchasing Perth Building Co.

Another local outfit that is benefiting from the backing of a large owner is Esslemont Cockram, which has nine WA projects worth about $100 million on its books.

These include the redevelopment of Applecross Senior High School and construction of a new mental health unit at Sir Charles Gairdner hospital.

The acquisition gave the WA business the ability to bring in experienced people from Cockram’s expansive operations.

He said Esslemont Cockram’s goal was to cement itself as a tier 2 contractor, working on projects valued at up to $100 million.

“We’ve got a wide presence across Australia and internationally and that differentiates us from the other tier 2 firms we compete against,” Mr Mithren told WA Business News.

“Cockram is known for being very good at technically complex projects,” he added.

Two national groups that will be more active in the WA market are Lend Lease and Mirvac, which have a range of projects on their book.

Lend Lease announced in November it had won a $208 million design and construct contract for expansion of Lakeside Joondalup shopping centre, which is part-owned by the Lend Lease-managed Australian Prime Property Fund.

Other Lend Lease projects in WA include the $1 billion Waterbank development near the Causeway, where construction of the first buildings is expected to commence in late 2014.

Mirvac is the developer of the only large CBD office project currently under way in Perth - the $280 million Treasury tower on Barrack Street.

It initially ran a tender for the construction contract, attracting expressions of interest from five major companies - BGC, Broad, Brookfield Multiplex, DORIC and Probuild - but opted instead to manage the work internally.

Mirvac’s chief executive development and group strategy Brett Draffen said this followed the move from stand-alone development operations in each state to a national construction function.

“It was apparent we had the skill set nationally to do the construction work internally,” Mr Draffen told WA Business News.

Site works for the 33-level office tower are currently under way, in tandem with redevelopment of the Old Treasury Building (by Built) and deconstruction of the office building at 565 Hay Street (by Northerly Group).

The next milestone for the precinct will be the selection of a contractor for the City of Perth library and plaza development.