Schools, aged care facilities, shopping centres and bars are among the eclectic mix of establishments installing solar panels, amid predictions commercial rooftop installations could grow by nearly a gigawatt in Perth and surrounds by 2037. 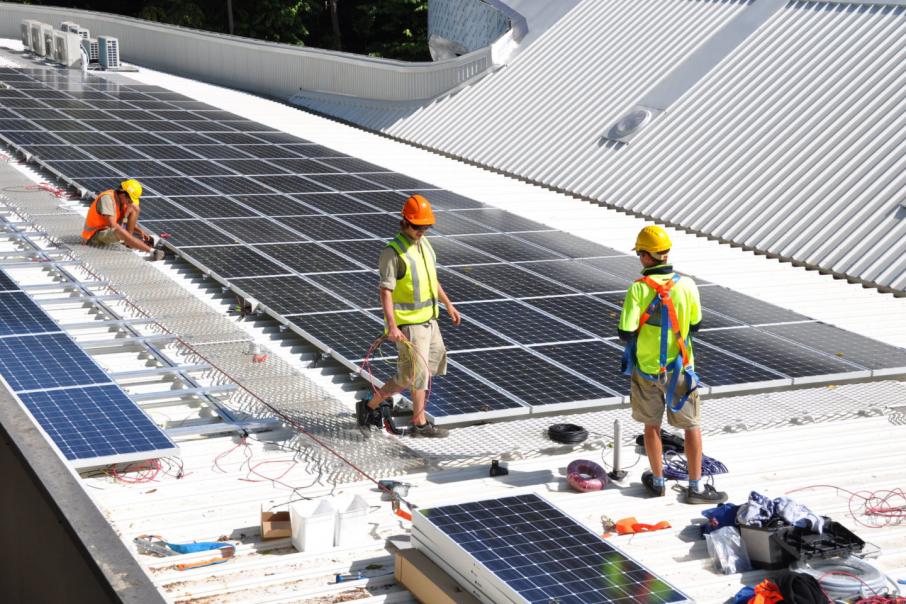 About 920 megawatts of commercial rooftop solar will be installed by 2037, according to Jacobs Engineering.

Schools, aged care facilities, shopping centres and bars are among the eclectic mix of establishments installing solar panels, amid predictions commercial rooftop installations could grow by nearly a gigawatt in Perth and surrounds by 2037.

In a recent report for the Australian Energy Market Operator, Jacobs Engineering surmised that rooftop solar installation would continue to grow rapidly in the South West Integrated System electricity network, which spreads from Geraldton in the Mid West south to Esperance.

That growth will be driven by significant growth in the number of businesses using rooftop solar, a take-up expected to rise from less than 100 megawatts installed to more than 900MW, helping boost overall capacity, which includes households, from around 500MW in 2016 to more than 2,500MW.

To put it in perspective, that’s nearly equivalent to the current generation capacity of state-owned utility Synergy.

“Almost every large school is in the market at the moment for solar,” Mr Da Cruz told Business News.

“We’ve got a couple of power purchase agreements under our belt with a couple of schools and we’ve sold mainly 100 kilowatt size (system) solutions.

“We’re getting a lot of interest now for 500KW up to 1MW in size installations for the larger schools.”

There is some evidence to suggest public schools will follow, with the Department of Education signalling an interest in the space, he said.

“We’ve just finished a big job with Southern Cross Care WA across five of their villages; retirement and aged care is a growing market,” he said.

Northam Boulevarde and Broadway Fair Shopping Centre, in Nedlands, were among those shopping centres putting on the panels.

Companies were taking up solar because they wanted to have more control over their power costs, Mr Da Cruz said.

“They’ve not had to pay much attention to (rooftop solar) in the past because (power costs) weren’t a significant line item,” he said.

Fears over the gas crisis and electricity price rises on the east coast were also fuelling the recent take-up, Mr Da Cruz said, while increasing numbers of miners and more remote industries were looking at solar.

Clean NRG founder Craig Donohue said there had been a major boom in solar installations in 2011, with the market progressively getting quieter until this year.

“We’re as busy as we’ve ever been,” Mr Donohue told Business News.

He agreed that there had been interest from retirement villages and schools, with many schools that had installed panels as part of a program five or 10 years ago now planning upgrades.

Further demand was driven by businesses that used refrigeration, including food processing and hospitality such as bars, hotels and bottle shops.

Mr Donohue said interest was greatest from businesses that operated seven days a week, as they would have greater utilisation.

He said one factor in favour of Perth was the long periods of sunlight, with greater exposure here than any other state capital, and much higher than in most of Europe.

Despite public discussion about an uptake of household battery systems, Mr Donohue predicted that commercial take-up would not be rapid, as such setups are more costly than basic panel installations.

That compared with other states, such as South Australia, where he said take-up would be greater due to the unreliability of the grid, something that was not a major issue in WA.

The Jacobs Engineering report echoes that thinking, predicting a very limited take-up of batteries in the commercial market (see graphic).