THE global credit crunch has made a significant dent in Perth's commercial and retail sales for the year to November, with total sales value down 26 per cent on last year. 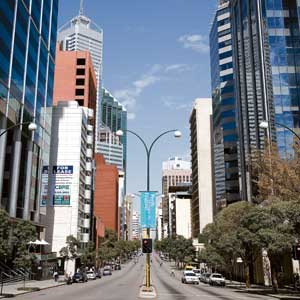 THE global credit crunch has made a significant dent in Perth's commercial and retail sales for the year to November, with total sales value down 26 per cent on last year.

Research for the latest Cityscope survey of Perth, for the three months ended November 30, noted seven commercial building sales in the past quarter worth a total of $172.4 million.

Retail building sales were also hit hard, with two sales in the November quarter worth $23.4 million capping off a poor year for retail building sales, with a total of eight transactions worth $56.2 million, almost half that of 2007.

Jones Lang LaSalle associate director sales and investments, Tom Nattrass, said the slowdown had been particularly evident in the past three to six months, with the stand-off between buyers and sellers and the difficulty in getting finance weighing on the market.

"A lot of people in Perth were of the opinion in early September October that WA might be able to wade through most of this economic upheaval. That's changed in the past six to eight weeks," he said.

"There are buyers there...they're looking for quality but they're also looking for it at the right prices, and sellers haven't adjusted their thinking.

"Even if the parties agree on price the next hurdle is getting finance.

"That's taken out a whole segment of the market that needs to worry about that."

Mr Nattrass said a clearer picture of where the commercial market was heading should emerge by mid-2009.

"Finance clauses are likely to be a lot more rigid and prevalent," he said.

"Due diligence has always been there, but buyers are being a lot more cautious and taking the full time in ensuring the assets they're looking at are what they expect or want.

Commercial building sales reached their lowest in the three months to May 2008, with eight buildings sold that quarter at a value on $89.7 million, the lowest result in five quarters.

"The market started to fall around December 2007 and January 2008, so we started to see the writing on the wall," Mr Mickle said.

"Larger deals are harder to fund. We've had very few substantial sales compared with other years.

"Under $10 million, business is still reasonable given the economic environment, but over $20 million it's harder."

Mr Mickle believes the market is as bad as it's going to get, with the current lift in enquiries likely to result in increased sales activity around March-April next year.

"People may be thinking we're very close to the bottom," he said.

"With the interest rate dropping we'll start to see some new impetus into 2009."

The largest of the commercial building sales this year was the August sale of Wesfarmers House at 40 The Esplanade for $84.8 million to Ascot Capital.

Among the city's other major sales were 109 St Georges Terrace, bought by Charter Hall Diversified Property Fund for $65 million, Alinta Plaza 12-14 The Esplanade, bought by New Star International Property for $60.9 million, and 553 Hay Street, bought by the state government for $42.5 million.

The slowdown in the Perth paled in comparison to that of Sydney, which recorded only four minor commercial building sales for the November quarter at a value of just $37.9 million, an almost 10-fold drop on the November 2007 quarter.

Total sales value for the year were down 7.6 per cent to just more than $1 billion, according to RP Data.