Fremantle’s east end is in the spotlight, but there are questions over the most appropriate type of development for the area. 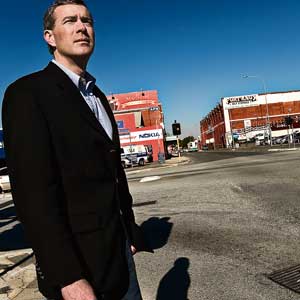 BIG PICTURE: Peter Nolin says the east-end development should be a city-wide initiative with a consistent vision. Photo: Grant Currall

THE Fremantle Chamber of Commerce has called on the City of Fremantle to support more commercial development at the port city's dilapidated east end rather than focusing on residential in-fill.

At a meeting last month, the council examined a planning and urban design study prepared by architecture and town planning firm Hassell, which recommended a dramatic population increase in the east end through medium to high-density residential developments.

After considering the report the council recommended a 90 per cent residential, 10 per cent commercial mix, contrary to the report, which suggested more economic benefit would be achieved through a 75 to 25 per cent mix.

The higher commercial floor space ratio could deliver a 40 per cent increase of retail expenditure, according to the Hassell report.

The council is commissioning 3D modelling of the proposal to assist community consultation before it reaches a final decision.

Fremantle Chamber of Commerce chief executive Peter Nolin said the chamber welcomed the proposal, but it was important that the redevelopment of the east end be a city-wide initiative with a consistent vision.

"We aren't convinced about the linkages between the east end and the city if it was purely residential," Mr Nolin told WA Business News.

"Even if it is predominantly residential, our view would be you should still have a kind of a social hub there where you have cafes and pubs and restaurants to create another vibrant precinct of the city.

"It really comes down to those linkages, and that's the missing piece."

Mr Nolin said a 10 per cent commercial mix would be an underutilisation of the precinct.

"Is that a smattering of stores, is that a newsagency, is it actually little service providers like architects and accountants on the first floor?" Mr Nolin said.

"We're not really sure, but that doesn't indicate vibrancy to us.

"Also, Fremantle already has different precincts; you have fishing boat harbour, you have the cappuccino strip, then you have the city centre, there's nothing wrong with having another precinct with its own character in the east end.

''We don't see any compelling argument that it has to be purely residential."

But Fremantle Council director of planning and development, Phil St John, said the council would be better served developing the existing commercial areas in Fremantle's CBD.

"There's a number of under-utilised commercial sites in what we see as the core CBD area, and this area is a bit outside of that," he said.

"From a planning point of view we don't feel there's an advantage in spreading that too thinly."

"We don't see many opportunities in the CBD or in the hinterland for strong residential growth, so this is probably the only one," he said.

"South of the CBD you've got heritage buildings, to the west you've got the ocean and the port, to the east you've got the prison, so really this is the only area where we see the potential for strong residential infill to support the CBD."