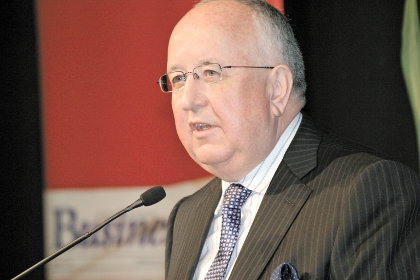 The last time I saw Sam Walsh, it was just before Christmas and he was shopping with his wife at David Jones in Claremont.  As always, he had time to stop for a chat.

While many other people rushed about frantically to complete their shopping, Sam was a picture of calm.

In fact, he was always a picture of calm, despite having one of the busiest workloads of anybody in Perth.

Not only was Sam one of Perth’s top business leaders, he was a champion of the arts in Western Australia.

His day job put him in charge of Rio Tinto’s global iron ore business, which is focused on the Pilbara but also has operations and assets in Canada, Africa and elsewhere.

In addition, since 2009, he has been a director of the London-based parent company, making him arguably the most important and well-connected business leader in Perth.

Since 2009, he has also held the title of chief executive Australia.

Rio’s decision to keep such a senior company director in Perth was in contrast to the practice at rival mining giant BHP Billiton, which has all of its top-tier management (its chief executive and group executives) based in the Melbourne head office or in other countries.

With Mr Walsh moving to London, it will be interesting to see who takes his job in Perth and where they sit in the global pecking order.

Mr Walsh has combined his Rio duties with several outside board positions, including as founding chair of the Chamber of Arts and Culture in WA.

His many other roles include being chair of the WA chapter of the Australia Business Arts Foundation, and chair of the Black Swan State Theatre Company.

Importantly, he did much more than sit on the board. He didn’t just lend his name to these organisations. He was actively involved and used his profile and influence to promote the arts sector.

His pulling power was illustrated two years ago, when he drew one of the largest audiences – about 850 people – at a WA Business News’ Success & Leadership breakfast.

Hopefully he will be able to continue some of his engagement with the arts sector, but his move to London and new job makes that unlikely.

He leaves a very large pair of shoes to fill.

AbaF state director Henry Boston praised Mr Walsh’s “unflappable” approach, and said his advocacy for the arts was in some ways a “game changer”.

“Sam came into the role as a cleanskin in terms of little previous arts interaction and so when he spoke about the need to nurture and support the arts people in government and business listened,” Mr Boston said.

Committee for Perth chief executive Marion Fulker said Mr Walsh had made a “valuable and visible contribution” to the business and cultural sectors, in both a personal and professional capacity.

“He always gives you his complete attention, is genuine in his engagement and provides sage advice to every issue,” Ms Fulker said.