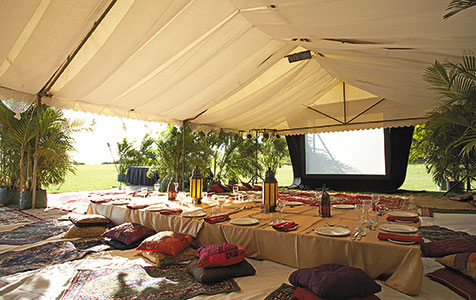 Cable Beach Resort’s strategy to attract repeat business through its conventions and events offerings has helped it win the Sir David Brand Award for Tourism at the WA Tourism Awards last month.

A key driver of the strategy, according to general manager hospitality Ron Sedon, are the custom business functions offered by the resort that incorporate Broome’s natural attractions and tourism activities.

“We on-sell and on-contract to local suppliers to a high level and I think we share the wealth around the town quite admirably,” Mr Sedon told Business News.

Mr Sedon said while 75 per cent of Cable Beach clients were from the leisure market, and 5 per cent of business came from weddings, conferences and business meetings made up the remaining 20 per cent, which was a sizeable market.

He said the resort had hosted several new car launches, banking and medical conventions, and was often booked by businesses looking to reward high achievers or to celebrate successful results.

“Broome is very much on the corporate bucket list,” Mr Sedon said.

“Connecting with Broome is quite easy and that’s important ... because most of the decision making occurs in the eastern states when it comes to major conferencing and major corporate events, so we have a dedicated person in our Melbourne sales office.”

The Broome resort recently hosted 400 people from banking corporations and is putting out a tender for a $500,000 contract to renovate its major conference facility.

“As probably the most remote town of its size in the country it’s particularly well serviced,” he said.

“Corporations don’t necessarily want to just stay in the resort, they want to have a function on the beach or at the outdoor theatre. There’s lots of options and I think that’s a big part of the attractiveness of Broome.”