RUSSELL Collins is an overachiever by any measure, but he'd be the last person to ever give himself that label. 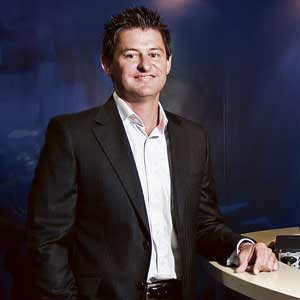 TAKING A CHANCE: Russell Collins says the opportunity to build a truly international engineering group was too good to refuse.

RUSSELL Collins is an overachiever by any measure, but he'd be the last person to ever give himself that label.

In 1999, Mr Collins became a founding director and part owner of Subsea Developments, a small engineering company focused on design engineering and project management of the underwater pipelines and structures associated with offshore oil and gas facilities.

In 2006, with 40 employees, a host of international clients and revenues exceeding $10 million, the company was bought by publicly listed Neptune Marine Services.

The opportunity to further build a truly international engineering group was an offer too good to refuse, and since the 2006 deal Mr Collins has shown no signs of slowing down.

"I do like the thrill of a chase and that's kind of motivated me to see how far I can get; I guess that's a good thing," Mr Collins said.

"But it can also be a bad thing because you always tend to chase new opportunities and sometimes you've got to hold yourself back and think, 'don't try and do everything before you're 40'."

And it's not just engineering that tickled the fancy of this 40under40 winner.

Having previously been involved with some property development, and currently supporting Neptune Marine Services with global strategic planning, mergers and acquisitions and business development, Mr Collins has his sights set on other, unrelated projects.

"We're looking to IPO that this calendar year."

Mobilarm is a man-overboard system originally developed for the recreational boating market. Mr Collins and his partners have developed some impressive commercial contacts, including the US and Australian Navy.

"We've got some really exciting potential contracts with some big international players," he said.

As exciting as this project seems, Mr Collins is keeping his feet firmly on the ground at Neptune.

"When people get acquired there's always that joke that in three years' time you're going to be sitting at Rotto, and you have those generic ideas and I know that's not me. I'm not going to be able to do that," he said.

Mr Collins said the biggest difference between running a private business and being part of a public listed, multi-national company was personal financial exposure.

"Being part of a much larger publicly listed company, a lot of the stresses and drivers are either self-imposed or are there because of what you want to achieve. This is not necessarily the case with private business, where you actually have that fear of failure and simply can't let it go because there are too many families relying on you," he said.

This realignment of motivators has allowed Mr Collins more freedom to take on even more challenges.

"It's just this transitional releasing of one set of stresses or commitments in your mind, and as they start to dissipate you're able to take on more stuff," Mr Collins said.

This includes an active involvement in various community based projects including Youth Focus, which supports teenage suicide prevention, and Mr Collins' passion for everything to do with AFL, stemming from his son's involvement in AusKick.

"I have even had discussions with WAFL clubs about being on their boards because I have interest in that stuff and to me that's not a job, that's a passion."