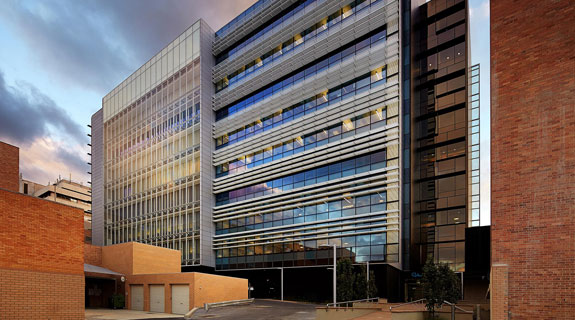 The scholarship was presented to Christopher Wallis, who is working under the supervision of Oliver Rackham at the institute’s synthetic biology and drug discovery group.

Colliers International WA chief executive Imran Mohiuddin said Mr Wallis was chosen from six applicants for the scholarship, which provides $10,000 per year for the next three years.

Mr Mohiuddin said the agency was delighted to provide the funds.

“Colliers International is a firm believer in the role of excellence, no matter the field or commercial endeavour,” Mr Mohiuddin said.

“We also recognise the importance to Australia of an institute such as the Perkins, and applaud its work in translating innovation and research into lasting health benefits for all.”

The Harry Perkins Institute was first established in 1988 as the Western Australian Institute for Medical Research.

It changed its name and rebranded in October 2013.

The Nedlands facility at QEII, designed by Hames Sharley, was officially opened last year, and houses more than 700 researchers over 10 storeys.

It also has a facility at Fiona Stanley Hospital in Murdoch, where 360 researchers are stationed