Collapsed builder’s work up for grabs

Builders have been invited to bid for the upcoming and current work of collapsed home builder Capital Works Constructions, in the wake of the company calling in administrators last week. 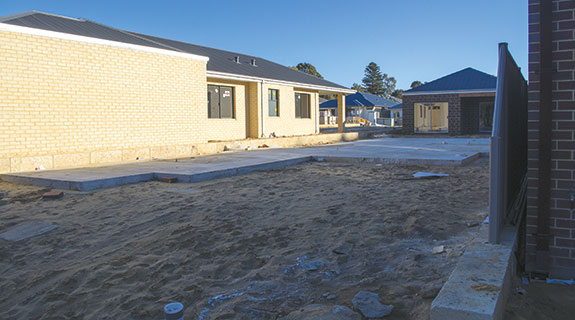 LONG WAIT: Business News understands the owner of this block in Coolbellup, a Freelife Homes customer, has experienced significant delays.

Builders have been invited to bid for the upcoming and current work of collapsed home builder Capital Works Constructions, in the wake of the company calling in administrators last week.

The pipeline of work covers more than 300 homes, with 229 under construction and a further 84 yet to be built under the Freelife Homes banner.

Capital Works Constructions called in administrators from Deloitte’s Restructuring Services division last Friday, while an expressions of interest campaign for its outstanding works has been launched in recent days.

A spokesperson for Deloitte said the administrators’ initial focus would be to work with insurer QBE to ensure customers and creditors were not left out of pocket. However the examination of the company’s finances remained in the early stage and it would take a number of weeks before the exact amount owed would be ascertained.

Similarly, the spokesperson said it would also be some time before the cause of the collapse was determined.

The Building Commission of Western Australia had been closely monitoring the home builder for some months prior to its collapse.

Building Commissioner Peter Gow said the Building Services Board had restricted Capital Works Construction from entering into any new home building contracts at the beginning of the month, following a number of disciplinary complaints made against the company and its directors.

Business News understands some of the complaints were allegations of poor construction quality that had not been rectified.

Also, documents obtained by Business News show that, as early as December last year, Capital Works Constructions managing director Joshua Coffey had been asked to verify the company had been paying its staff and subcontractors, and had all of its insurance requirements up to date.

Deloitte will hold a creditors meeting for customers, employees and tradespeople caught up in the collapse on Tuesday.

Following reporting the failure of the business online, Business News was contacted by a number of aggrieved parties who claimed they were owed money.

One of those parties was J&B Modern Day Ceilings director Jordan Ristoski, who has launched legal proceedings against Capital Works Constructions to recover around $27,000 he said the builder owed his business.

Mr Ristoski said the matter was due to be heard in court later this month.

Background checks into Capital Works Constructions and its directors revealed no prior history of company collapses, while attempts to contact Mr Coffey had not been responded to at time of publication.

Another director, architect Frank Ricci, said he was not involved with the day-to-day running of the company and that all enquiries regarding the circumstances of the collapse should be handled by Mr Coffey or the administrators at Deloitte.

Mr Coffey and Emma Coffey, with whom he shares a Subiaco address, are also directors of JGQ Developments, which developed a four-storey apartment building in East Perth, Space Luxury Residences, between 2008 and 2014.

Another company caught up in the collapse under the Capital Works Construction banner, Visionaire Property Group, received an Urban Development Institute of Australia award in 2013, for its apartment project, The Bellevue, on West Perth’s Bellevue Terrace.