King & Wood Mallesons has broken with tradition and become the first major law firm in Perth with a fully open-plan office. 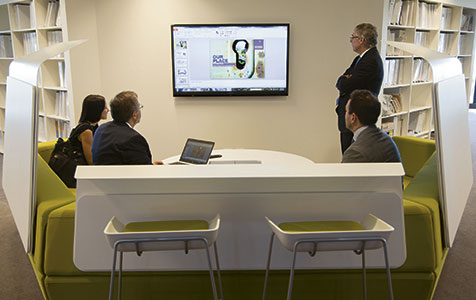 King & Wood Mallesons has broken with tradition and become the first major law firm in Perth with a fully open-plan office.

The firm joins companies such as BHP Billiton, Bankwest and PwC in adopting what’s termed a ‘collaborative’ working environment in its new offices in the QV.1 building on St Georges Terrace.

Only national law firm Corrs Chambers Westgarth has beathen King & Wood Mallesons in being the first in Australia to go open-plan - Corrs has begun a national rollout of 'collaborative capabilities', starting with its first open-plan office in Sydney last year.

Gone are the days when senior partners occupied corner offices with expansive views while junior employees were holed up in inner-offices with not even a glimpse of the world outside.

Instead, King & Wood Mallesons’ new layout positions partners alongside secretaries and junior staff, with not a dividing wall in sight.

Having staff on all levels of the hierarchy ladder working alongside each other is intended to foster collaboration and a more creative environment, with positive outcomes for staff wellbeing and the firm’s productivity.

There’s also a cost-benefit from the firm introducing what it’s calling the ‘office of the future’ – potentially thousands of dollars could be saved by not having to completely restructure an office with dividing walls.

The adoption of collaborative working has been on the rise in Perth, with PwC adopting the most extreme scenario and eradicating permanent desks in its activity-based design.

King & Wood Mallesons decided that approach was a step too far, and not appropriate for its 150 Perth staff, so it worked with interior design firm Geyer to customise its own activity-based plan.

“It’s fair to say that most offices that I’ve been in are actually not very acoustically satisfactory,” Mr Naughton told Business News.

“So confidentiality in an office environment is more apparent than real.

“Here, the places that we do go to are acoustically proofed so you can have a genuine conversation … I’ve found it easier to talk freely.”

Mr Lundberg said there was a certain amount of resistance from some staff members, which paved the way for a robust consultation process to reach a satisfactory outcome.

On Mr Lundberg’s list of must-haves was adequate technology that would allow workers to move seamlessly from their desks into private rooms while on a call.

“My own view was that if we didn’t get the technology, this idea (collaborative working) would all fall down,” Mr Lundberg said.

The use of Bluetooth telephone technology and wireless internet has helped tick that technology box.

The office also includes what Geyer has dubbed a ‘mediascape’ – a pod of couches around a table facing a screen that acts as a large display of what’s on participating people’s personal laptops and tablets.

Again, collaboration is the key with this initiative, with up to five people able to plug their laptops in and the group easily switching between displays of information on each person’s screen.