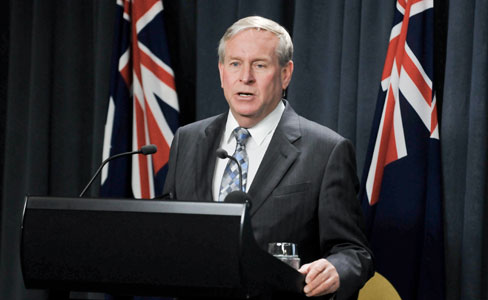 A private company backed by building magnate Len Buckeridge has accused premier Colin Barnett of making false and misleading statements, after Mr Barnett said the company should drop a $1 billion legal claim and proceed with its port project.

Lawyers for James Point Pty Ltd, which is part owned by Mr Buckeridge, have lodged a claim in the WA Supreme Court, blaming the government for the consortium's inability to build the private port near Kwinana.

James Point signed a deal with the Court government in the year 2000, but has subsequently been hindered by successive governments.

The company said in a statement Mr Barnett continues to mislead the community by saying that the government is prepared to sell land for port purposes adjacent to the area to be reclaimed.

It added that the government “is only prepared to entertain inadequate leases, and refuses to even talk about the actual sale of land”.

The premier was factually very wrong when he told Parliament yesterday that JPPL wanted to build an island in the middle of Cockburn Sound for a container facility, the company added.

“JPPL does not. It is his own statutory authority Fremantle Ports that does!“

Mr Barnett told ABC radio today that it would cost the state millions of dollars in legal fees if it were sued for $1 billion.

"Where would that billion dollars come from?" he said.

"In reality, if he was successful, it would come out of education, health (and) services for disabilities.

"I don't think for a moment Len Buckeridge wants to do that."

He said he did not want a "huge chunk" of Cockburn Sound turning into a parking area for ships and containers.

"I would hope Len would drop all this nonsense and get on and build his bulk products port, or berth, because it is needed," Mr Barnett said.

The premier said his government had offered Mr Buckeridge land to buy, as well as some of the transport, road access and rail access.

"But I'm not going to be giving Len Buckeridge land at zero price or heavily discounted prices," he said.

"He'll pay a proper price for land and that offer has been on the table for quite some time."

The company believes that its plan for a 100 hectare land-backed container port has significant environmental advantages to the competing proposals put forward by the Fremantle port authority, whch have included an island port concept.

It noted that the premier’s apparent opposition to new container facilities in Cockburn Sound contradicts the government’s press release of 29th June 2012, which stated that:

“Extensive research has identified the coastal area from Naval Base to James Point in Cockburn Sound as the most suitable location for additional container-handling port facilities.”

James Point lawyer Michael Hotchkin said if the government did not change its position, the matter would be concluded in the courts.