Woodside Petroleum has urged governments across Australia to back its ambitious growth projects, which include $30 billion on LNG projects along with development of industrial-scale hydrogen power. 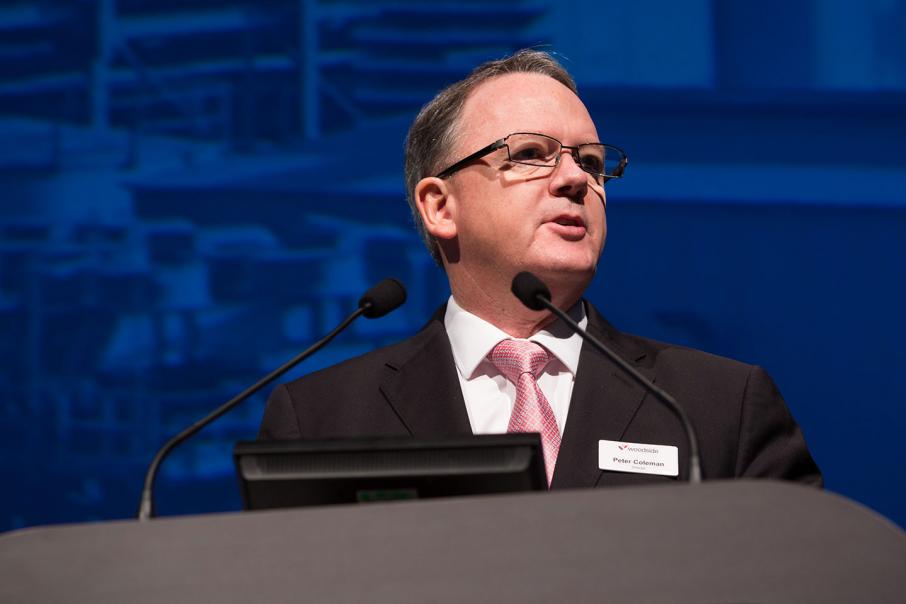 Woodside Petroleum has urged governments across Australia to back its ambitious growth projects, which include $30 billion on new LNG developments in WA along with development of industrial-scale hydrogen power.

Speaking at the Melbourne Mining Club, chief executive Peter Coleman also outlined opportunities to use more liquefied natural gas (LNG) as a fuel source in the shipping and mining industries.

Mr Coleman said Woodside was seeing commercial pressure from customers in Japan and Korea, who were encouraging the company to develop hydrogen power as a carbon-neutral energy source.

“Green hydrogen is the longer-term goal, using renewable power to source hydrogen from water,” he said.

“But to get there we need low-cost hydrogen, for instance from natural gas, to build scale and experience in hydrogen transport and distribution.”

Mr Coleman said some of Woodside’s destination markets are using LNG to produce hydrogen, which makes sense, given LNG is hydrogen-rich and easily transportable.

“This emerging power source has the potential to transform our industrial sector, offering carbon-free pathways for energy-intensive manufacturing and for heavy transport,” he said.

“We can take the first step already, by using the abundant natural gas available off Western Australia as feedstock for hydrogen production as we target a future world of green hydrogen from water, using renewable power.”

“By 2030, we think hydrogen could already be providing industrial-scale power.”

Another area of opportunity was in shipping, where the industry is clamping down on traditional fuels.

“It behooves governments to move forward as quickly as possible with industries that are able to support changes in the shipping fleet to lower-emissions fuels,” he said.

“Through the Green Corridor joint industry project, we have collaborated with resources and shipping partners - including Rio Tinto, BHP, Fortescue and Shell - to design LNG-fuelled vessels that could ship Australian resources exports to the world.

“There is the opportunity for Australia to be a world leader on this, but it is going to require a joint effort from across the resources and shipping industries - and leadership from the government.”

Mr Coleman also called on governments to incentivise the switch from diesel to LNG as a fuel for mine trucks and locomotives.

“The Pilbara in northern Western Australia is the ideal place to drive this transition - and Woodside is developing the infrastructure to support it – but there may be a role for government to provide appropriate incentives for conversion of industrial vehicles,” he said.

These changes were part of an agenda Mr Coleman mapped out to address climate change, saying a global carbon price was also needed.

“The scientists have warned of the consequences of inaction,” he said.

“Regardless what you think of that science, if we wait to see if the scientists are right or not, it will be too late to act.”

Mr Coleman’s speech coincided with a Woodside presentation at a Committee for Economic Development of Australia seminar in Perth today.

Senior vice president Niall Myles, who was standing in for chief operations officer Meg O’Neill, said the company needed support from both government and industry partners if it was to seize emerging opportunities.

“If we don’t find ways of working together, we may miss out.”

This will be supported by development of a Burrup Hub, that will link the North West Shelf venture’s Karratha gas plant and Woodside’s Pluto gas plant - both of whch are operated by Woodside.

“It means thousands of jobs as we spend up to $30 billion on these developments,” he said.

Mr Myles said a rise in LNG prices signalled an emerging opportunity, with a global supply gap expected in the early 2020s.

“Those market dynamics have triggered a race to sanction new LNG projects in Canada, America, Mozambique, Qatar and Russia,” he said.

“So the timing for us to develop the Burrup hub is right now.

“The timing is right, but it is also tight.

“We’ve set ambitious timelines so that we can deliver LNG right when the world needs it.

“We’ve already started submitting approvals for these projects and its timely to consider that government agencies and regulators have the appropriate resources in order to review and approve these within the time frames we have set ourselves.

“We need to pull together to achieve shared outcomes.”