The newly appointed chair of Iluka Resources details how he handles his busy board portfolio. This feature includes our listing of Perth's busiest company directors. 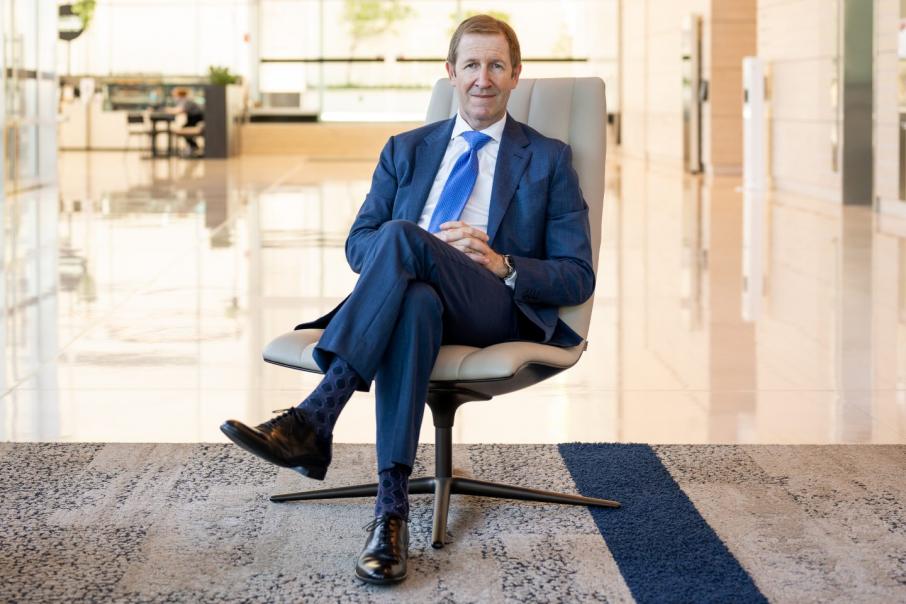 Rob Cole has learned to juggle a highly variable workload since becoming a professional director six years ago.

“There are times when I’m extremely busy; on the other hand, I [tell] my wife I’m in semi-retirement,” Mr Cole told Business News.

However, as chair of four major businesses, a director of a major charity and a consultant to an interstate government enterprise, he’s a long way from what most people would consider retirement.

But for someone used to working 80-hour weeks as a corporate lawyer and Woodside Petroleum executive, it is a big change.

“It’s different, it’s not like a full-time executive with a baseload of work, each day and every day,” Mr Cole said.

“It comes in waves.”

That followed his promotion to chair of another ASX-listed company, mining services provider Perenti Global, in May last year.

In addition, he was appointed chair of state-owned business Landgate in 2020.

These roles added to two long-running board commitments. Mr Cole has been a director of not-for-profit housing provider St Bart’s since 2016 and chair of state-owned energy utility Synergy since 2017.

On top of these roles, he is an adviser to the board of the Power and Water Corporation in the Northern Territory, with a focus on gas industry matters.

Mr Cole acknowledges he has a full portfolio, especially as chair of two ASX-listed companies.

“As a simple rule of thumb around the market’s expectations, two chairs of large, listed companies and you are full,” he said.

“I’m mindful of that.

“Most people say four chairs is a pretty full workload but certainly not without precedent.”

Mr Cole is correct in that observation, though there are not many directors with a comparable workload.

One notable person with arguably an even busier workload is Richard Goyder.

Mr Goyder is also chair of the AFL Commission, the Channel 7 Telethon Trust and the WA Symphony Orchestra.

Diane Smith-Gander chairs two ASX companies but at a much smaller scale.

She chairs Zip Co and DDH1, is a director of a third ASX company, AGL, and will shortly start as chair of health insurer HBF.

Another director with a busy workload is former Rio Tinto chief Sam Walsh, though he operates outside the ASX sphere.

He is also a director of giant Japanese trading house Mitsui & Co, which is one of the largest foreign investors in Western Australia, and Banjima Native Title Aboriginal Corporation.

Other directors with a similar number of board roles include Frank Cooper and Mark Barnaba.

However, they chair just one or two boards, with their other roles being deputy chair or simply board member.

Similarly, Ben Wyatt and Sharon Warburton are prominent company directors with at least six board roles, but in no cases are they chair.

Mr Cole said managing fluctuations in workflow was one of the main challenges he faced.

“You need to save headroom, because although it feels like a part-time role, things can very rapidly change if there is an event affecting one or more of the organisations,” he says.

“You go from your governance role into being totally immersed in a crisis affecting one company or a major opportunity.

“In terms of managing it, I believe I can, I have a very strong work ethic.”

This work ethic can be called upon when multiple board meetings coincide, each with 300 to 1,000 pages of board papers.

Mr Cole said company directors were under close scrutiny when he accepted his first major board role 10 years ago.

“A decade ago, life as a company director was already complex, he said.

“There were already very high governance expectations in Australia.”

He said the scrutiny had become more intense.

“There has been a real rise in shareholder and community expectations,” Mr Cole said.

“And also, a rise in shareholder activism in all forms, from putting non-binding votes up at AGMs through to pressure behind the scenes from major shareholders.

Mr Cole believes social media has had a big impact, especially in relation to environmental, social and governance (ESG) issues.

“There has been an exponential rise in the ability of people to conduct campaigns online in relation to ESG issues,” he said.

Added to that have been issues including the banking royal commission, the Juukan Gorge controversy and, in particular, the increased focus on sexual harassment and sexual assault.

“It’s an issue of massive social and community concern and the blowtorch has been applied directly to companies and in turn to their governing body,” Mr Cole told Business News.

He said the increased demands on company directors were reflected in the growing influence of Larry Fink, the chairman and chief executive of US investment giant BlackRock.

“He and other like-minded investor groups’ control over half the world’s invested funds and the temperature, so to speak, that Larry Fink has been applying to companies over the past three to four years has just gone up and up and up,” Mr Cole said.

Mr Fink’s annual Letter to CEOs has become a revealing gauge on the mood of institutional investors. 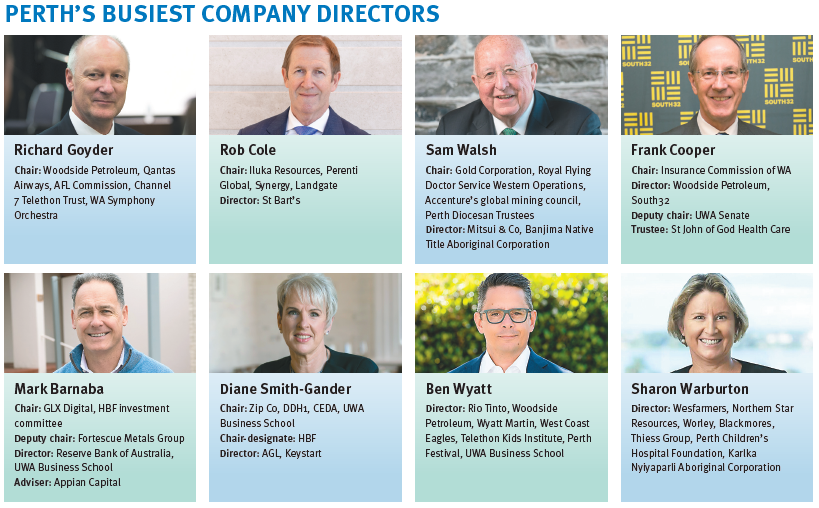 The theme of his 2022 letter was stakeholder capitalism: a concept that broadens the focus beyond profits and shareholders.

“Stakeholder capitalism is not about politics,” he wrote.

“It is not a social or ideological agenda. It is not ‘woke’.

“It is capitalism, driven by mutually beneficial relationships between you and the employees, customers, suppliers, and communities your company relies on to prosper.”

Mr Fink also wrote about the importance of decarbonisation and the way in which it drives investment dollars.

“It’s been two years since I wrote that climate risk is investment risk,” his letter stated.

“And in that short period, we have seen a tectonic shift of capital.

“There is effectively now a demand, a requirement, that companies have tangible plans to decarbonise, otherwise they will switch their investment funds elsewhere,” he said.

“That pressure is intense and increasing.” Learning Mr Cole said a formative experience for him was attending Woodside’s board meetings, after he joined the company as general counsel.

“From day one at Woodside in 2006 I was in the boardroom, and that was a great privilege,” he said.

“Seeing the likes of Charles Goode and Michael Chaney sitting opposite each other, discussing and debating issues.

“It certainly wasn’t a case of watching a group of directors in group think, there was really good debate with some of the leading directors in the country, indeed leading chairs.

“I still have the model of those two in my mind for an effective chair.”

Six years after joining Woodside, Mr Cole was unexpectedly asked to join the board as an executive director.

“It’s the only time in my career I have been totally surprised by a conversation with my boss,” he said.

“I hadn’t seen it coming, hadn’t expected it, but was delighted to take it on.”

Mr Cole said he was embraced by the board as a peer, but it took some getting used to.

“As a second executive director, you are wearing a management hat and you have your boss in the room sitting next to you as the managing director,” he said.

“I found my way to contribute and speak my own mind and not undermine my boss.

“It was not straightforward.”

Mr Cole said the shift to being a non-executive director also took some getting used to.

“It’s a team sport and you need to get used to that; you are one of many in the room,” he said.

“You need to be prepared to make your contributions proportionately and listen very carefully to others in the room.”

Mr Cole said the role of a non-executive director was not just to monitor management, but to bring different perspectives and think laterally.

“There are periods when you have a lot of free time, even as chair of four boards,” he said.

“My epiphany was to use that time to read broadly, read about politics, read about what’s going on elsewhere in the world, green movements, social movements.

“The value I could bring was to add those external perspectives to the boardroom.”

Mr Cole said being chair of the board required a very different skill set.

These include being a very active listener, staying in charge of the agenda and ensuring discussions stayed focused.

Another key skill was being able to provide clarity to management after a long board discussion.

“The relationship with the chief executive is critical,” Mr Cole said.

“You need trust and confidence, and respect for each other’s role.”

An unusual feature of Mr Cole’s board portfolio is the mix of public sector and private sector roles.

He said this had more to do with opportunity than design, but also reflected his prior experience.

As a partner at law firm Mallesons Stephen Jaques (now King & Wood Mallesons) his clients ranged from private companies including BHP and Epic Energy to government utilities such as Western Power and SECV in Victoria.

At Woodside, he engaged extensively with governments, state and federal, to progress project approvals.

Mr Cole also acquired some empathy for the public sector after growing up in Canberra, where his late father, Sir William Cole, was a senior civil servant.

“I’m quite pleased to be involved in the public sector as well as the listed company sector,” he said.

Mr Cole’s career could have taken a very different path.

While at Woodside, he was a candidate to succeed Don Voelte as chief executive.

“He pushed my areas of responsibility way beyond [simply] legal [counsel].

“He got me to run the oil business while Kevin Gallagher was at Harvard doing the advanced management course.

“That was unprecedented, having a lawyer run the oil business; that was consistent with Don’s appetite for risk.”

Mr Cole was sent to Harvard a year later before the board set about selecting the next chief executive.

“I was a candidate, but I knew I was a long shot; having a lawyer run an ASX top 20, global company bristling with engineers, geologists and geophysicists, where the projects are in the tens of billions of dollars,” he said.

He moved to Adelaide in early 2015 but was back in Perth by the end of the year for family reasons.

“I still believe it was the right role for me at the right time,” he said.

“Looking at what they have embarked on since, it was that potential that interested me.”

With a focus on family, Mr Cole said he was loath to take on an executive role that was all-consuming but there was no shortage of other opportunities.

“I got involved very early when there was the first kernel of an idea to build an online LNG trading platform,” Mr Cole said.

“I really enjoyed that year because I was working in a small, close-knit team doing something quite entrepreneurial.”

He took on some board role while at GLX but said the key decision was agreeing to chair Synergy.

“I’d had some advice that you really need to decide about how you position yourself,” Mr Cole said.

“Are you someone who is still coveting a chief executive role or are you serious about building a non-executive portfolio?

“When I took that on, as a major chair role, that clearly positioned me as a non-executive director.”