Dean Gallagher was neither a businessman nor a coffee aficionado when he launched Five Senses coffee 14 years ago. 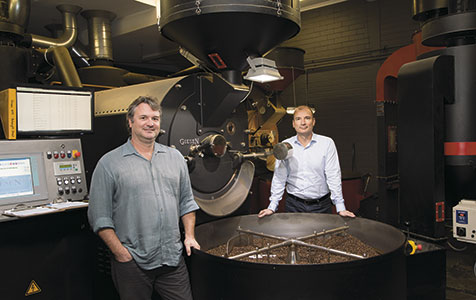 Dean Gallagher was neither a businessman nor a coffee aficionado when he launched Five Senses coffee 14 years ago.

Rather, he was the principal of an international school in Papua New Guinea and simply decided he needed a way to earn money in Australia so he and his family could return home.

His answer was to import green coffee beans from the farmers whose children he had been teaching in Papua New Guinea.

“All the cash in the province came from coffee … school fees would pretty much be timed to when the cherries (which contain the coffee beans) were picked – that’s when the parents had money,” Mr Gallagher told Business News.

Mr Gallagher had not even tasted a drop of coffee from his beans (nor did he know how to make an espresso coffee) when he began knocking on the doors of Perth cafes attempting to sell his product.

Much has changed since those early days.

Mr Gallagher’s business has grown to become one of the most popular coffee roasters in Western Australia and now roasts about 40 tonnes of beans a month.

The company holds an exclusive distribution licence for Seattle-made Synesso coffee machines and is its largest seller worldwide.

It also owns the Australian Barista Academy, and has just bought its first mill in Sumatra in an effort to cut out middlemen and deliver higher returns to coffee farmers.

Such significant growth, including a period where a new team member was employed every month (there are now 65 employees) did not come without challenges.

Mr Gallagher said about three years ago he realised his lack of business knowledge could only take Five Senses so far.

“(For instance) we were going around with phrases like ‘we employ Five Senses people’ – everyone knew what that meant but nobody could describe what it actually was.”

Mr Bentley described the Five Senses business as a group of people led by a ‘guru’ without structures in place to support sustainable growth or, if need be, continue without Mr Gallagher at the helm.

“It was my job, really, to impart an understanding of how the business needed to behave as a larger organisation that was a little bit different from a smaller one,” Mr Bentley said.

One of the first steps was to move a manager into the chief executive role, which enabled Mr Gallagher to take a step back.

More structured employment processes have been put in place, which was a significant change for a business which tended to dance around issues of employee non-performance.

While Mr Gallagher describes the process of implementing big business principles as “agonising”, he said establishing a team of leaders in the chief executive, chief financial officer and chief operating officer roles meant he could focus on business strategy.

Right now that includes how to remain competitive in a market alongside an increasing number of boutique roasters leveraging off the status of being small and independent – a position which Five Senses itself once held and which has become increasingly popular.

Mr Gallagher said what Five Senses had that smaller roasters did not was certainty of supply and, thus, certainty of product.

Five Senses has also adhered to consumer demand for more information about the source of its coffee beans by sharing individual stories about the growers and giving proof the importer is giving the growers a fair deal.

The company has recently indulged this mission by buying a mill in Sumatra so it can buy beans direct from farmers and process beans before exporting to Australia.

“Coffee farmers are screwed over constantly and there’s not enough money in it for a huge, cluttered supply chain,” Mr Gallagher said.

“By us buying the mill we cut out exporters, importers and millers straight away – we are all of those so it means that we can pay more for the coffee without necessarily paying a lot more for it at our end.”