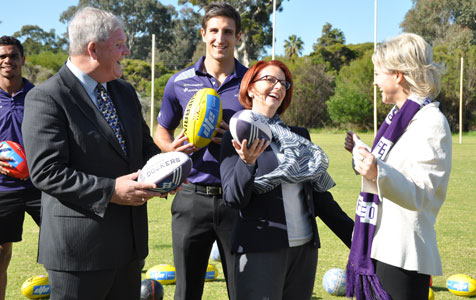 From what was essentially vacant land to an emerging town centre – developers like Australand and Georgi are capitalising on strategic southern location Cockburn Central.

With the Perth to Mandurah railway line connecting the southern suburbs to the CBD and beyond, LandCorp and the City of Cockburn have long promoted a ‘transit-oriented development’ on the edge of the Cockburn Central train station.

The result is a community built around a public transport hub, with residential and commercial developments and key facilities built in close proximity to the rail line.

The City of Cockburn secured a major coup late last year with the Fremantle Dockers agreeing to move their training and administration facilities into a $114 million complex to be built in Cockburn Central.

A range of aquatic and recreational facilities at the complex will be available for public use.

The federal government will contribute $10 million towards the project through its Regional Development Australia Fund, and the Dockers are expected to pitch in up to $10 million, with the City of Cockburn handling the lion’s share of the funding.

Property group Australand recognises the opportunity Cockburn Central presents, and has been a major investor in the development.

It has secured six land parcels for the construction of 500 residential apartments across multiple stages, as well as commercial and retail space.

Buyer demand has been consistently strong, with 50 per cent of the most recent stage of 39 apartments sold out two weeks after release.

Australand WA general manager Tony Perrin said the apartments had attracted a strong cohort of investors who had seen the potential for further commercial development in Cockburn Central.

“What we’re recognising is that the astute market sees that what is occurring down here is going to change monumentally in a very short space of time,” Mr Perrin told Business News.

“We now have probably almost 300 apartments finished on ground and being occupied. That’s happened in a very short amount of time.”

Cockburn Central’s close proximity to institutions such as Murdoch University and the soon-to-open Fiona Stanley Hospital had been a strong driver of buyer interest, according to Mr Perrin.

Also, buyers had become increasingly wary of congestion pressures and were often willing to compromise on location for access to strong public transport links, he said.

“If you look at the cost of getting around, people are more conscious now in the back-pocket of the costs of transport,” Mr Perrin said.

A further 130 apartments have been added through the nearby Signal Terrace development, a partnership between the Department of Housing and contractor Probuild consisting of a mix of public and private dwellings.

While there are some indications Perth’s rental market may be starting to soften after a long period of unusually high occupancy, Mr Perrin said he expected it would remain tight enough to drive more first home buyers into the market.

“People have elected not to spend over the last couple of years, looking for the opportunity in the market where it does avail them to be able to make that commitment to buy,” he said.

“We will see that equation between demand and supply remaining, in my view, at around the threshold that it is at the moment.”

City of Cockburn director of planning and development Daniel Arndt said a major challenge for the council had been convincing developers to invest in a previously unoccupied area.

“It was a big gamble by Australand (to build the apartments) because there was actually no market here,” Mr Arndt told Business News.

“There was nothing to actually say that you were going to be able to sell this type of product, in terms of apartments, out this far from the CBD.

The council hopes to develop Cockburn Central into a vibrant community space, with plans in the works for outdoor film screenings and weekend markets.

Mr Arndt said the council’s pro-development attitude had paid off, with a number of investors coming to the table once they realised the potential that existed in the area.

A key commercial development in the area is Giorgi Group’s Plaza 817, with all but one of its 41 offices now occupied by tenants, including Dome Café and Australia Post.

Cockburn Central has been a beneficiary of the state government’s office relocation scheme, with Fire and Emergency Services opening a new $40 million headquarters in the town centre.

The facility hosts 350 staff and has capacity for a further 70 workers, substantially boosting the local commercial traffic.

The town centre will also house the city’s new police headquarters, with preliminary plans lodged and site works under way.

Another big development in the works is Perron Group‘s $110 million expansion of the nearby Cockburn Gateway shopping centre.

The 20,000 square metre expansion is expected to be completed late next year, and will feature a further 60 stores and an additional 1,200 parking bays at the complex.