Perth’s newest marina and beachside estate is entering its final stages of development. 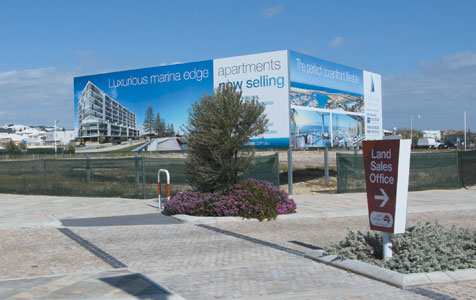 BEACHSIDE: About 150 apartments are expected to be complete at Port Coogee by the end of December. Photo: Attila Csaszar

Residential development along the Cockburn coast is continuing at pace, with fresh apartments and retail projects emerging at Port Coogee and South Beach as the oceanside enclave evolves.

The first apartment buildings at Port Coogee’s Marina Village, by TRG Properties and Match respectively, are expected to be completed before the end of the year.

TRG is also facilitating pre-sales for its nine-storey, 109-apartment Marina Edge apartment project, which has a construction value of $33 million and was approved for development in January this year.

Mr Perrin said about 230 housing lots remained to be sold at Port Coogee, while apartment projects by Australand and other developers would add a further 1,000 dwellings to the area over the next five years.

He said the arrival of coffee franchise Dome had also provided significant vitality to the area.

“The market is maturing down there, there are a lot of residents now living in Port Coogee and the atmosphere is far more engaging than it was two years ago,” Mr Perrin told Business News.

“With the additional residents moving into those apartment projects we’ll see a real change in the level of patronage and people around the project, which will really start to demonstrate a lot more of a vibe and community feeling.”

Mr Perrin said the next step was the construction of the Port Coogee Shopping Centre, which was approved last month by the metropolitan south west development assessment panel.

The 4,431 square metre centre has signed Woolworths as its anchor tenant, while a leasing campaign to fill out its speciality shops was under way.

The leasing campaign is being undertaken by Lease Equity, with 14 tenancies available.

Australand appointed Colliers International last month to sell the centre through an expressions of interest campaign, in accordance with the company’s develop-and-sell strategy for retail projects.

“The centre will inject the foundation of the retail and food and beverage offering within the location and anchors the village centre for the foreseeable future,” Mr Perrin said.

“It provides the convenience retail amenity that the place has been designed on.”

Construction of the shopping centre is expected to begin early in the new year.

Port Coogee will also be boosted in coming years by the proposed redevelopment of the heritage-listed South Fremantle Power Station.

While still in the fledgling stages of planning, the proposed redevelopment will provide a tangible link between Port Coogee and South Beach.

The City of Cockburn released a master plan for the revitalisation of the decrepit building in July this year.

The plan, which was developed by architecture firm HASSELL, calls for five-storey apartment buildings located close to the power station, which would be complemented by three-storey walk-up apartments to provide a diversity of housing stock.

Low-rise housing developments limited to two and three storeys have been flagged for the south of the site, while the power station itself will be retained and redeveloped to complement the surrounding precinct.

Residential development will be largely focused on the eastern portion of the building, while a commercial, retail, hospitality and tourism precinct has been proposed for the station’s turbine hall.

In total, the power station plan calls for more than 900 dwellings and a diverse mix of retail and commercial uses.

Further up the coast near South Beach, the metropolitan south west DAP earlier this month approved another apartment project for construction.

In its meeting agenda, the DAP said the proposal would feature a strong urban edge that would provide a high level of activation and interaction with adjacent streets, as well as future public open space at the rear of the site.

The project will be located a little up the coast from Port Coogee in the South Beach Village precinct, close to a pair of lots that have been approved for multiple dwellings and two-storey townhouses.

The approvals allow for 10 townhouses and 42 apartments on the adjacent lots, which are located on O’Connor Close.

The site’s zoning allows for a five-storey apartment development.