A new co-working space has been launched 18 storeys above Adelaide Terrace, with Quest East Perth establishing a flexible office facility in joint venture with business networking forum The CEO Institute. 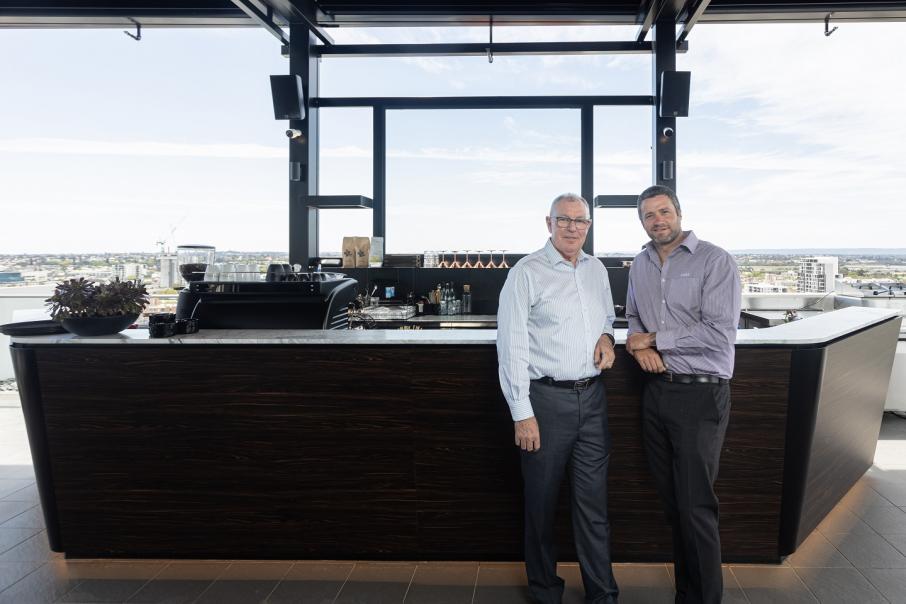 A new co-working space has been launched 18 storeys above Adelaide Terrace, with Quest East Perth establishing a flexible office facility in joint venture with business networking forum The CEO Institute.

Quest East Perth’s executive lounge will provide a headquarters for the 80-strong Western Australian chapter of the national networking organisation, while also providing corporate travellers access to meeting rooms and an events space.

The facility also includes a rooftop bar to complement the networking and meeting areas, with the space providing Quest East Perth the ability to offer a rooftop breakfast service for its guests.

Quest East Perth owner Byron McDonald said it had cost around $1.2 million to convert the hotel’s two penthouses into the executive lounge, an investment jointly made with The CEO Institute.

Construction work was performed by Renascent, while design services were provided by BHO Interior Design.

“We had a beautiful space at the top of the hotel that was being underutilised, and I thought we could add significant value to the membership of the CEO Institute and to the guest experience at Quest East Perth together in a joint venture,” Mr McDonald told Business News.

Mr McDonald said the establishment of the co-working space would help set Quest East Perth apart from its competitors, and was indicative of the lengths hotel owners were going to in order to establish a point of difference in Perth’s increasingly competitive hotels market.

Business News understands the executive lounge is the second facility of its kind to be installed in a hotel, with a co-working facility part of the recently redeveloped Quay Hotel, formerly known as The New Esplanade Hotel.

“Currently in Perth there are a lot of excellent hotel products, which is great for Perth.

“This was a way that we’ve been able to raise the bar here at Quest East Perth and not only bring us into alignment with, but to go past a lot of the competition with the facilities we now offer on site.

“It’s very tough the hotel market at the moment, but that being said we’re tougher, and we’ve made an investment here to really add value to the guest experience, which will drive business to the hotel.”

CEO Institute WA director Steve Stanley said he expected the facility to provide a boost to the networking club’s membership, which until now did not have an official WA headquarters.

The CEO Institute has more than 800 members nationally.

“Certainly there will be some people who will see the benefit in having this sort of facility available,” Mr Stanley said.

“We haven’t increased fees for this, members will pay the same fee they always have, so this is a bonus for them; we’ve added a space where they can conduct business and for the Institute to have a home, so to speak.”