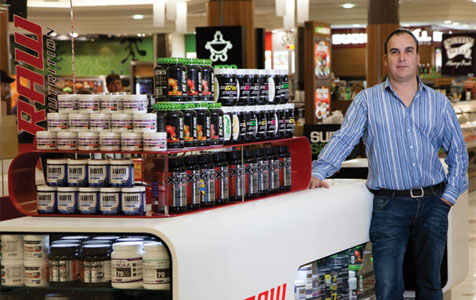 After running some of Perth's best-known nightclubs for five years, businessman David Heaton is taking a decidedly different tack in his next business venture.

Mr Heaton has bought an 80 per cent stake in Perth-founded fitness supplements business RAW Nutrition and is rapidly expanding across Perth.

The entrepreneur has become well-known in the Perth hospitality scene since buying the Metropolis nightclub in Fremantle in 2008 and the Amplifier/Capitol club on Murrary Street two years later.

Before that, his hospitality experience was limited to the other side of the bar.

"But I walked out of a meeting at Metropolis and I said to my business partner 'I think we're buying that business'," Mr Heaton said.

He immediately set about working to 'professionalise' the business and take them beyond the small-business mindset, an important step in their growth, he said.

A contact made in hospitality has led him to now invest in the RAW Nutrition business, which was established by mixed martial arts fighter Marko Peselj.

Mr Peselj had opened a kiosk selling the nutrition and sports supplements in Baldivis when he approached Mr Heaton for advice on how to expand the business. Seven more stores have been opened across Perth since Mr Heaton bought in last year.

"We soon realised that we're in a growing industry, people are getting more active and more healthy and at that stage there were no real shopping centre-based specialists in fitness supplements," Mr Heaton said.

Perth's fitness industry has undergone a massive transformation, with the growth of 24-7 gyms a prime example.

WA-founded Snap Fitness has opened 14 gyms in the past two years, and Jetts now has 40 with a further four due to open in the next couple of months.

Since 2010 US brand Anytime Fitness has opened 16 in the metro area with a further seven to be opened soon.

Mr Heaton is no stranger to retail; he was the man behind mobile phone franchise Communique, which he sold to Fone Zone in 2006 for $6 million.

He said that experience confirmed his interest in buying into RAW.

"I just feel like I've got a little bit of unfinished business in retail," Mr Heaton said.

Mr Heaton is also on the verge of opening a small bar in the Perth CBD – to be called Bar de Halcyon in Wolf Lane – and continuing to run the other major nightclubs.

As with his entrance into the hospitality sector, Mr Heaton's knowledge of the fitness industry was slim to none a year ago.

"But it's sparked me on the journey of getting fit again, because being in the hospitality industry and working late nights hasn't been the best thing for my health," he said.

And then there's the motivation to get in shape for the Virgin Galactic SpaceShipTwo flight next year, for which Mr Heaton paid $200,000.

So far he's lost 10kg using RAW Nutrition products and is aiming to be proof of results possible from the use of fitness supplements.

"The healthier you are the more energy you have and the more you get out of life," Mr Heaton said.

"You want to enjoy the experience rather than be suffering through it and being a big fat blob floating around in space."