The passing of Nelson Mandela will have significant consequences for South Africa. 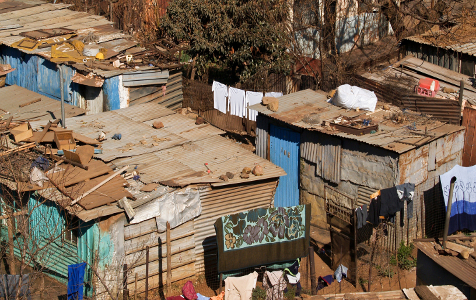 DIRE OUTLOOK: Unemployment in some parts of South Africa is as high as 50 per cent, shanty towns remaining overcrowded and investment in new factories and mines is slowing.

Called a ‘brain drain’ by those countries from which the human tide originates, the arrival of reasonably well-educated and highly motivated people from Britain, Italy and Greece underpinned much of Australia’s growth in the years after World War II. Vietnamese migration in the 1970s topped up the pool of hard-working people.

Today, there is a fresh rush to get into Australia by people who do not have to risk their lives on the short hop in a leaky boat sailing from Java to Christmas Island.

The Irish, and more Brits, are keen to make the move to a new country that is directly plugged into the fast-growing economies of Asia. Ireland in particular is suffering a savage brain-and-skills drain.

But the next wave of highly talented migrants wanting to call Australia home could cause more of a challenge for the Australian government.

South Africa, a simmering pot of trouble caused by a grossly unequal share of wealth, has entered the no-man’s land of what might be called its post-Mandela phase, with the death of its iconic leader, Nelson Mandela, causing a fresh outburst of angst among the ‘white tribe’ of that country, especially those with English as a first language.

Once the mourning phase ends, it’s likely the demands of black South Africans for a greater share of the country’s wealth will accelerate; and while the current situation is partly the problem of almost 20 years of black-dominated rule, the easy target will be white-owned businesses.

Already there is deep concern in the white tribe that they are facing a form of reverse racism, with most government jobs preserved for black people and most white businesses (especially mining) needing to engage in a process of black empowerment.

What’s happened – and it was something obvious to outside observers shortly after the 1994 election at which Mandela cruised into the presidency – is that the bad (and corrupt) habits of the white tribe have been copied by the multi-layers of black tribes that make up the Rainbow Nation.

Extreme wealth at the top of the totem pole remains in the hands of a tiny minority, with the only difference being that some of the ultra-wealthy today are black, although the majority remains white.

This sharing of the loot at the top has done absolutely nothing for the vast majority of South Africans, who remain deeply impoverished; unemployment is running at more than 50 per cent in parts of the country, shanty towns remaining overcrowded with poor water and electricity services, and investment in new factories and mines is slowing to a trickle because the owners of capital are squirreling it away and foreigners are reluctant to invest.

Into this cocktail of trouble, which has already been demonstrated in mass deaths during mine site strikes, comes South Africa’s time of reckoning; the post-Mandela period and the prospect of more money and skilled people heading for the exits.

Australia will be one of the first ports of call, followed by Canada, the US, and the UK, with each of those countries facing a tricky question – do they boost their intake of South Africans based on a wealth and skin-colour test, or do they shut the doors because such an action would be considered racist?

For everyone involved the death of Mandela is a dangerous time, with his country open to a trip down the same blind alley into which the ghastly Robert Mugabe led Zimbabwe.

Extreme black nationalists are already singing from the Mugabe songbook, with firebrand activists demanding the nationalisation of the mining industry and the expropriation of other white-owned businesses.

As unemployment grows, the economy struggles with a shortage of capital and essential services and more skilled people pack their bags for Perth, Toronto or London, the problems will mount.

In time, perhaps as soon as by mid-next year, Australia will be asked a question by a queue of South Africans wanting to migrate – do you want us, and if not, why not?

AS South Africa confronts its future as a country without a unifying leader, there is a problem of a different sort continuing to brew in Europe, where the economic inequality that exists is very much a deliberate choice by the various governments of that region.

Money, absolutely vast amounts of it, continues to be tipped into a grossly inefficient (but culturally important) farming sector.

The latest estimate is that European farmers, some working plots no bigger than an Australian backyard, are receiving annual incentives valued at $US78 billion.

If the dollar figure doesn’t stun you then the farm subsidies share of the total budget of the European Union will – 43 per cent.

Subsidies for high-cost farms on the outskirts of quaint French and Italian villages was once a source of great annoyance for British taxpayers, but faded from view recently as a second absurd system of subsidies was developed – this time for green-power schemes.

In time, it is not unreasonable to estimate that more than 60 per cent of the entire EU budget will be allocated to inefficient industries in the name of preserving culture and preserving the environment, while the real economy continues to shrivel, unemployment rises, and entire countries go broke.

AUSTRALIANS may like to think of themselves as a reasonably intelligent lot, but the latest batch of entry scores needed to earn a place at a top business school do not appear to support that belief.

In the US, scores in the Graduate Management Admission Test (GMAT) to earn a place in a top school have to be 700 or higher. Stanford’s entry score is 740. Harvard 730.

International business schools also have high entry hurdles to clear. Insead in France requires a score of 700, as does CEIBS in Shanghai.

Australia’s top-ranked business school, the Graduate School of Management in Sydney requires a GMSAT of 630, a score beaten only by the Manchester business school in Britain with its 620 for the rank of lowest.

The clever country? Not really.