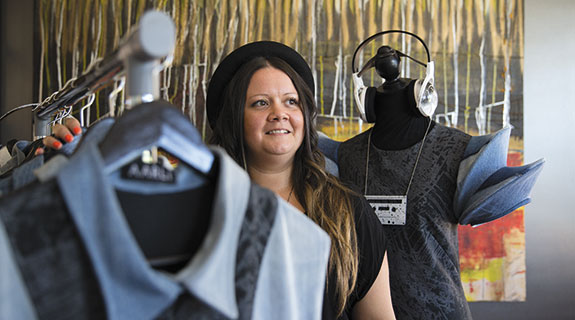 ALTERED: Teagan Cowlishaw is on a mission to change society’s perception of indigenous people and fashion. Photo: Attila Csaszar

Corporate-wear startup Rana takes its name from the Rana Plaza in Bangladesh, which collapsed in 2013 killing more than 1,100 garment workers, mostly women.

Recent graduate Ms Dracup decided to create the business with Ms Parker (a fashion designer and friend) after working as a sustainability engineer and being disappointed with the lack of ethically produced clothes she could wear to the office.

She researched and questioned local brands about their manufacturing processes and workers’ conditions, but was left unsatisfied by what she found and became convinced there was an opportunity in the market.

“There’s a lot of women who are in the corporate sector who are quite conscious about the decisions they make when purchasing products (including) clothing and the supply chains behind clothing, especially after Rana Plaza,” Ms Dracup told Business News.

Ms Parker has designed the first range of women’s outfits focused on providing a flattering yet comfortable fit with practical aspects, such as incorporating pockets and sleeves that won’t bunch under jackets.

Currently in Sri Lanka travelling on a creative industries grant from the Department of Culture and Arts, Ms Parker is sourcing and manufacturing the clothes she said were being made by cotton handlooms in factories operating under the ‘Garments without Guilt’ campaign.

The businesswomen have priced Rana’s collections, available online, from between $50 and $180 and in sizes eight to 14.

“Part of the reason we’ve been trying to price ourselves at that more accessible level is to become competitive with current mainstream clothing labels and actually be able to convert people in the future, once there’s a larger support and groundswell behind the brand,” Ms Dracup said.

The Rana co-founders have almost raised their target of $15,000 through a crowdfunding campaign on Pozible, as well as identified a figure that will allow them to be cash flow positive and set their sights on growth.

“What makes our business a little bit different from others is that the aim is not to increase profit, but instead to grow the business and to increase the number of jobs we can to provide to others who are in the production line and actually help them get out of the poverty cycle,” Ms Dracup said.

Ms Cowlishaw recently received more financial support than she was seeking on Pozible to pay for a marketing campaign for her fledgling agency, thanks in part to new sponsors the Vasudhara Foundation and the Indigenous Wellbeing Centre.

“Since our launch we have received numerous responses from supporters, government departments, sponsors and people within the industry,” Ms Cowlishaw said.

“We believe Australians are interested in buying from sustainable and ethical brands.”

However, she said in an industry where even major Australian fashion houses and the retail sector generally were struggling, short-term gain had won out over commitments to sustainability and ethics.

“Sustainable and ethical labels from Perth find it hard to survive in this current climate,” Ms Cowlishaw said.

Despite the challenges she is optimistic for the future of sustainable, ethical and indigenous fashion, noting the positive impact celebrity supporters such as UK fashion designer Stella McCartney had achieved.

“It begins with major corporate brands giving Australian consumers more choice when it comes to accessing and purchasing sustainable and ethical products,” she said.

“Simultaneously, as labels and designers we need to make the changes ourselves.

“To lead by example, for instance by sourcing sustainable base materials from ethical sources, not creating fast fashion with a use-by-date and a toxic footprint.”