FOR the past decade, the Clontarf Foundation has forged partnerships with business leaders and heads of government to help develop its program to assist Aboriginal youth. 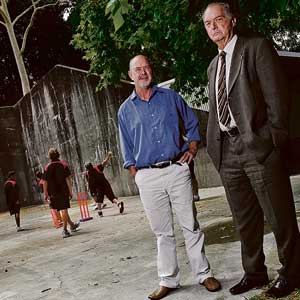 FOR the past decade, the Clontarf Foundation has forged partnerships with business leaders and heads of government to help develop its program to assist Aboriginal youth.

And the support has been put to good use, with 1,700 young men from across Western Australia and the Northern Territory participating in the program last year, up from just 25 in 2000.

The not-for-profit foundation aims to improve the discipline, life skills and self-esteem of young indigenous men, and by doing so equip them to participate meaningfully in society and the workforce.

Each of the 26 academies across the state has an extensive football and sports program, with all achieving attendance and retention rates of 80 per cent and 90 per cent respectively.

"It's not about football, but in this instance that is the best vehicle to achieve the outcomes we are chasing," Mr Neesham said.

"What we do is we use the existing passion within the community to attract the boys back to school, keep them there and then develop within them the attitudes and values that exist in normal aspirational youth. When programs are fully matured we mentor boys daily for a minimum of five years.

"We go through a very thorough meeting process prior to setting up an academy, which includes the local indigenous groups, businesses and educators. If we all agree, then we proceed. There is no way we will start a program unless we are welcomed by all parties."

The foundation has a 30-30-40 funding structure where the state and federal governments fund about 30 per cent each of the organisation's operations, and the rest is generated by corporate partnerships with private business.

"Most organisations do a certain amount of charitable work and some companies don't have an appetite for what we do, but in the areas we work in, say mining and the resources industries, there are good business reasons for these companies to have a positive involvement with the indigenous community," Mr Kelly, chairman of the Clontarf Foundation, said.

"The vast majority of our money comes from medium-to-large corporations as opposed to individuals and we deal with relatively few companies, so it's more important that business leaders know and approve of what we do than it is to have a profile with the general public."

Mr Neesham said the foundation only partnered with corporations that allowed it to operate independently. They then forged close and ongoing working relationships with these types of partners.

"Our general manager of employment conducts an audit to identify all the jobs in a company that might be appropriate for our graduates. We know our kids and what jobs they're suited for and so we can then carefully match our boys to the most appropriate jobs," he said.

"The reason this model works is that we partner with these companies, we get to know them, they get to know us and we stay in contact so a genuine relationship develops."

Mr Neesham said about 80 per cent of the foundation's year 12 graduates obtained full-time employment within a year.