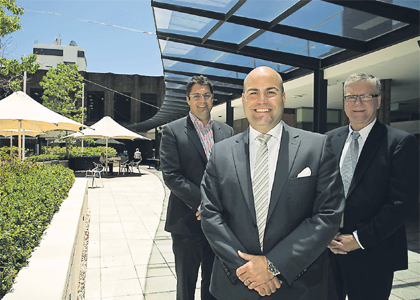 THE Perth Diocesan Trustees has added an $85 million office and retail development to its CBD projects pipeline.

Designed by international architecture firm The Buchan Group, the building will have a total of 11,000 square metres of office space over nine floors.

The ground floor has been reserved for retail. Parking for tenants will be located on a single below-ground floor.

The Cloisters shopping arcade will be realigned with Shafto Lane and will introduce more than 2000sqm of retail space to the development.

More than half of the office space has been pre-committed to engineering company Aurecon, which will occupy the first five floors of the building.

Aurecon is also involved in the development, providing structural and services engineering for the project.

The Perth Diocesan Trustees is a corporate body that oversees the Anglican Church’s extensive property portfolio, which includes several sites in the CBD.

Hamish Beck, of Beck Advisory, which advises the PDT, said the body was in negotiations with two interested parties for the remaining top four floors but had yet to finalise commercial terms.

Anglican Diocese of Perth executive officer Brian Dixon said the PDT had taken on the project because it believed it was an “opportune” moment in the Perth real estate market.

Property Council of Australia figures released in August showed the Perth office vacancy rate was still a tight 4.4 per cent, with A-grade vacancies touching 4 per cent.

The 861-863 Hay Street development will be built to A-grade specifications, similar to the PDT’s other development at 565 Hay Street, located within the St George’s Cathedral and Old Treasury Building precinct redevelopment on St Georges Terrace.

The 565 Hay Street development, located on the site of the Law Chambers Building, involves the demolition of the law chambers, the construction of the new Perth Library and the refurbishment of the Public Trustee Building.

The Public Trustee Building will have approximately 7,700sqm of office space over 11 storeys. It will include 340sqm of retail space on the ground floor.

Renovations are scheduled to start in April next year and finish in June 2014. Demolition for the new library is under way and construction is due to be completed by September 2014.

Mr Beck said the PDT was also poised to appoint architects for a planned development next year on a site in Pier Street.

Mr Beck said the old Playhouse Theatre site within the cathedral and treasury precinct, would also be used for an office development but the size of the project had yet to be determined.

He said the biggest effect the development at 861-863 Hay Street would have on the CBD was the realignment and widening of the mall with Shafto Lane.

“This will provide significant north-south connection from effectively Mill Street right the way through to Wellington Street,” he said.

“That is one of the big planning outcomes the City of Perth was keen to achieve ... it is trying to achieve a full north-south connection from Wellington Street right the way through to the convention centre and St Georges Terrace.”

Another proposed two-tower office and residential development on Murray Street will help make this ‘connection’ if it gets planning approval, due to be decided later this week.