BHP Billiton’s annual meeting in Perth today resembled a debate on climate change, with chairman Jac Nasser expressing frustration that the company’s achievements in that field were not being recognised. 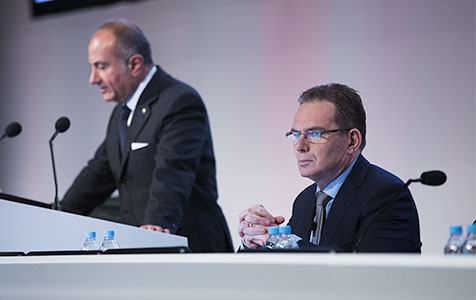 BHP Billiton’s annual meeting in Perth today resembled a debate on climate change, with chairman Jac Nasser expressing frustration that the company’s achievements in that field were not being recognised.

“We’re not blindfolded to the issues,” he said.

“Our frustration is that we were one of the few companies to be out there when it wasn’t as comfortable as it is today.”

Mr Nasser appeared testy at times, as shareholders asked repeated questions about the potential liability BHP could face from its fossil fuel activities and the adequacy of its response.

“We have included a price on carbon in investment decisions for the past decade,” he said, adding that “we believe our portfolio is robust under extreme climate change scenarios.”

“This company is well positioned for a future that no one can define in specific terms. It would be hard to find a company better prepared.”

Mr Nasser said BHP would retain its focus on the resources sector, and therefore would not be investing in wind and solar.

He argued commodities like gas, potash and copper would benefit.

Former mining executive Ian Dunlop nominated for a place on BHP's board at today’s meeting, saying the company was headed for oblivion unless it acted on climate change.

Based on votes lodged ahead of the meeting, Mr Dunlop will not be successful in his bid for a board seat.

Chief executive Andrew Mackenzie said the mining giant had started conversations with the new Abbott government about scrapping the carbon tax, but the dialogue had a long way to run.

"We're looking very keenly with them as to what we can do with their direct action measures,” Mr Mackenzie said.

“We expect that will protect the competitiveness of trade-exposed industries across Australia, not just ours.”

He said the company was keen to understand how it could achieve emissions reductions, but such measures needed to be replicated across the world.

"There's no point in giving up CO2 emissions in Australia only to find CO2 is going to be emitted less efficiently elsewhere," he said.

"So far I'm finding these discussions very constructive and we have a number of ideas and over time they'll be shared.

"The conversations have a long way to run."

“We’ve always said a price on carbon is appropriate and correct. The board’s position hasn’t changed.”

He said its policy stance was guided by the six principles it released in October 2010 to guide carbon regulation.

In his opening address, Mr Nasser said China's economic growth was resilient enough to drive strong demand for commodities for the next 15 years.

"With employment conditions and income growth remaining resilient, we believe the Chinese government has the room and flexibility to pursue reforms that support its policy of stable, long term growth," he said this morning.

"We expect the Chinese economy to grow at over seven per cent next year.

"China and other emerging economies will be the major drivers of global economic growth in the long term, which could deliver up to a 75 per cent increase in demand for some commodities over the next 15 years."

"Only a few countries in the world are well placed to supply this increased demand for commodities, and Australia is one of them," Mr Nasser said.

"Therefore, we believe your company remains well positioned to contribute to the prosperity of the regions where we operate, including Australia."

BHP made a profit of $US10.9 billion in the 2012/13 financial year, a drop of 30 per cent from the previous year due to weaker commodity prices.

The company has cut costs and spending in response to price falls, and aimed to extract more value from its existing operations.

The company's production in the first quarter of the 2013-14 financial year was higher than analysts had expected.

Mr Mackenzie told shareholders that production would increase by eight per cent in the coming two years.

"We are increasing our focus on our four pillars - iron ore, petroleum, copper, and coal, and we continue to operate our aluminium, manganese and nickel businesses as efficiently as possible," he said.

In poll results released on Friday, counting both votes from the dual-listed company (ASX and FTSE), all items recommended by the board including the remuneration report and re-electing board members were passed by a clear majority.

Climate activist Ian Dunlop, whose bid for joining the board was not endorsed by BHP Billiton, was not elected after receiving only 3.8 per cent support.