City of Perth says hotel too tall for waterfront 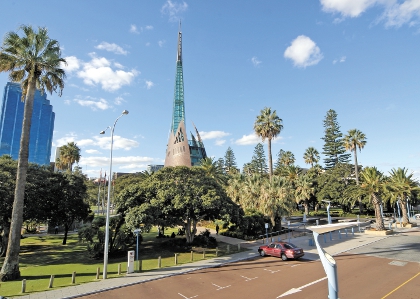 The City of Perth says an 11-storey hotel would destroy the amenity of Barrack Square.

The City of Perth won't back a hotel application at Barrack Square, adjacent to the contentious Elizabeth Quay development, because it says the proposed 11-storey development is too tall.

Perth City Council said it would refer the application to the Metropolitan Redevelopment Authority and the Swan River Trust with a recommendation for refusal, because the proposed building would “significantly exceed” building heights at Barrack Square.

The proposal called for the development of a 230-room, 11-level hotel featuring two bars and four restaurants at Lot 351 Barrack Square, which is located immediately east of the Bell Tower.

The approximate cost of the hotel would be between $100 million and $200 million.

Lord Mayor Lisa Scaffidi said in a statement that a development of that scale at that site was not appropriate and would diminish the prominence of the Bell Tower.

“However the council is taking a positive approach by recommending changes that could be made to the proposed building so that it would better integrate with the area,” Ms Scaffidi said in a statement.

“There have been a number of proposals for this site over many years and it is certainly the Council’s hope that a suitable hotel development will eventuate.”

Ms Scaffidi, however, was joined by James Limnios as the only councillors that backed the proposal at a council meeting last night.

Perth City Council has approved previous smaller scale hotel applications for the site, which developers have not progressed due to uncertainty surrounding the economic viability of hotel projects in the CBD.