The City of Perth has launched a free wireless internet service in the central business district - but it comes a year after a local technology company did the same. 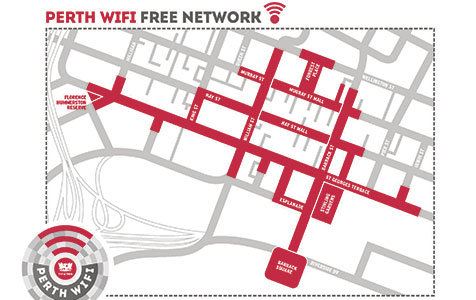 Coverage map of the City of Perth's new WiFi service

The City of Perth has launched a free wireless internet service in the central business district - but it comes a year after a local technology company did the same.

Today's launch makes Perth the first Australian capital city to provide free WiFi access as a holistic service - as opposed to offering 'hotspots', which had been trialled in locations such as the Northbridge piazza.

It has taken two years for the council to build the infrastructure to support the service.

Meanwhile, local technology company aCure Technology has been offering free WiFi in the CBD for more than a year.

The service has since been amalgamated into aCure's hardware company, Acurix Networks, but remains available and running on aCure's original Metromesh platform.

aCure Technology initially launched the service in 2006 as a paid-for service but lifted the paywall in October last year - giving users access to the network both indoors and outdoors.

The company told Business News it wasn't costing the company anything to run the WiFi network, so it decided to give something back to the community by offering it free of charge. It had initially offered to sell the service to City of Perth, but it declined.

City of Perth Lord Mayor Lisa Scaffidi said free WiFi was a key driver of economic activity and the city would continue to expand the service to include locations such as the Perth City Link area, Northbridge and East and West Perth.

aCure Technology was bought by Amcom Telecommunications in August for $14.3 million.