City Link project ahead of schedule 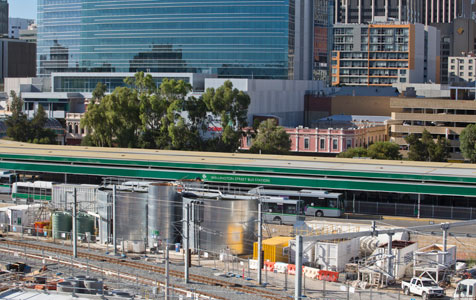 The rail component, which included sinking a section of the Fremantle line, upgrading Perth Station and creating a new tunnel under the northern end of the Barrack Street Bridge to service the new Platform 9, had originally been set for completion by mid-2014.

A new pedestrian underpass between Perth Underground and Perth Station will open before Christmas, allowing work to begin on the next stage of the project in the new year.

“Good planning and work by the Public Transport Authority and its alliance partners means the project, which was started two-and-a-half years ago, will be delivered sooner than expected and on budget,” Transport Minister Troy Buswell said.

"There’s no denying there has been some disruption for passengers but it has been well managed and the end result will make it all worthwhile."

The next stage of the project will involve the construction by Brookfield Multiplex and BG&E of a new $249 million underground bus station at Wellington Street.

Construction of a temporary bus station for passengers is under way on the Roe Street side of the site, with a second temporary station to be built on Wellington Street.

The federal government has contributed around $236 million to the City Link project, with the City of Perth chipping in about $38 million.