China-based Citic Group has flagged a $US1.4 billion to $US1.8 billion impairment at its Sino Iron magnetite project in the Pilbara as a result of the falling value of iron ore. 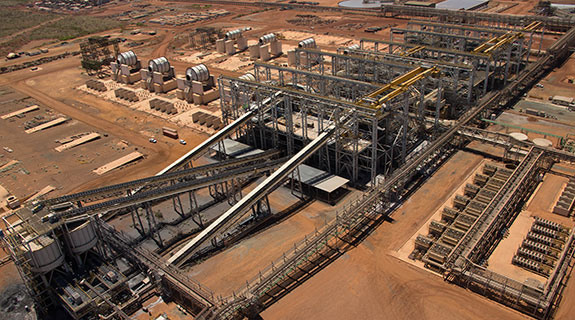 The first two production lines were completed at Citic's Sino Iron project in 2013.

China-based Citic Group has flagged a $US1.4 billion to $US1.8 billion impairment at its Sino Iron magnetite project in the Pilbara as a result of the falling value of iron ore.

The company said while the impairment was a non-cash item, it would reduce Citic’s yet-to-be-reported 2014 profits.

“Shareholders will have noticed the significant decline over the past months in the price of iron ore,” the company said in a statement.

“The directors wish to inform investors that based on current information, an estimated impairment of $US1.4 billion to $US1.8 billion is likely to be made in the 2014 accounts.

“When finalising Citic’s 2014 accounts, the directors will pay particular attention to the value of this asset.”

Sino Iron, the largest magnetite iron ore development in Australia, has been shipping iron ore concentrate since the end of 2013 to Citic’s steel plants, as well as other steel producers in China.

The project is in the final phase of construction, with the first two production lines already in operation, while lines three and four are targeted to begin commissioning in late 2015, followed by lines five and six in 2016.

“The plan is to have all six production lines operating by the end of 2016,” the company said.

During peak construction, the company has previously stated that about 1,400 people would be working on the project.

In the last year, Citic awarded about $500 million in construction contracts to companies including Kerman Contracting, Monadelphous Group, Southern Cross Electrical Engineering and ECM for work at Sino Iron.

The impairment follows Atlas Iron’s flagged $900 million write-down of its Pilbara assets in December last year, which was announced shortly after the iron ore miner said it was operating just at break-even before restructuring costs.