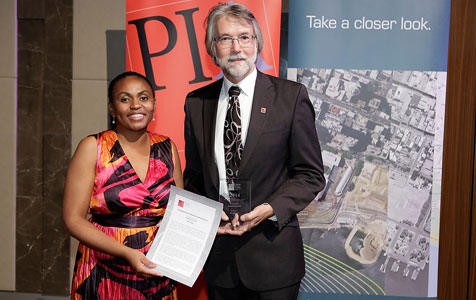 Peter Ciemitis being presented with his prize by category sponsor Landgate's Emiria Nyakudarika at the PIA awards ceremony on Friday.

Roberts Day senior designer Peter Ciemitis and architecture and planning group HASSELL have been lauded for their contributions to the sector by the industry’s peak representative body, the Planning Institute of Australia.

Mr Ciemitis was named Western Australian planner of the year by the PIA at a gala awards ceremony over the weekend, while HASSELL won both the minister’s award and the president’s prize for its Healthy Active by Design tool it developed in collaboration with The Heart Foundation.

Mr Ciemitis has had more than 30 years’ experience in the planning sector, with his primary focus on the design of town centre and residential villages.

The institute said Mr Ciemitis had been instrumental in recent years in the delivery of three major projects, which addressed long-standing issues in the north-west and South West of WA – Broome North, Vasse Newtown, and Mulataga.

“Mr Ciemitis’s delivery of masterplans for Broome North, Mulataga, Fraser’s Landing and Vasse Newtown among a host of projects has allowed the delivery of the projects in a manner that responds to the local conditions and a style suited to the local identity and landscape of each place,” the PIA said.

The PIA said HASSELL’s initiative was an innovative tool to help planners develop towns in a way that encouraged physical activity and fought obesity and disease.

The judges said the tool had the potential to refocus the planning and design process on one of the most important and fundamental outcomes of planning – the health and wellbeing of communities.

Other award winners include the City of Swan’s bushfire mapping technology, and the Western Australian Local Government Association’s biodiversity plan.

The redevelopment of Claremont Showgrounds also received a commendation in the best planning idea category.

“The various projects and planners that were nominated for the awards this year were all very impressive in their respective fields, and are collectively contributing to a more liveable and vibrant city,” Ms de Jager said.

“Many of the entrants in 2014 exemplified significant developments in place-making and planning technology, equipping the city and its surrounding suburbs with the necessary infrastructure and amenities to cope with our increasing population and lifestyle choices.”

A full list of award winners can be seen below: