REAFFIRMING the importance of Western Australia's trade relationship with China is sure to be a high priority for Premier Colin Barnett on his relationship-building visit this week. 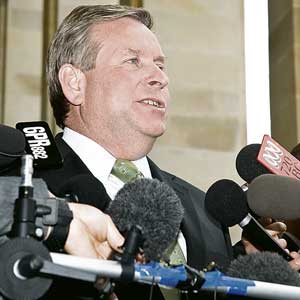 DELICATE: Colin Barnett has acknowledged a degree of tension in the Australia-China relationship. Photo: Grant Currall

REAFFIRMING the importance of Western Australia's trade relationship with China is sure to be a high priority for Premier Colin Barnett on his relationship-building visit this week.

China, the world's second largest economy, is the state's largest export market with $22 billion worth of trade last year.

Recent political and corporate issues, including the detention of Australian-born Rio Tinto executive, Stern Hu more than two weeks ago, have caused disquiet among some businesses dealing with China.

Government and industry bodies agree the relationship is obviously vital to WA but it is in desperate need of strengthening.

Mr Barnett said he would use his visit to reinforce the support from his government in trade and investment from China, considering more than 70 per cent of Australia's exports to China are sourced from WA.

"Because of some issues in recent months, there is an element of tension in the relationship between Australia and China," Mr Barnett told WA Business News.

"The failed investment by Chinalco into Rio Tinto, the subsequent proposal by BHP and Rio Tinto to merge their iron ore operations, some wider political issues and, more recently, the detention of Mr Stern Hu in Shanghai.

Mr Barnett said while he would focus on developing the maturity of the relationship between WA and China that would not stop him from commenting on Mr Hu's case if the opportunity arose.

"I would like to see the relationship progress from it being simply an export market to a more embracing training and investment partnership," he said.

"We have to be very respectful and recognise it's a very different political system, but if there is an opportunity to put the case for Mr Hu to have access to legal representation, greater communications with diplomatic officials and the like I will certainly put that case forward."

But Mr Barnett highlighted it was futile to be judgmental about the internal workings of China.

"This is a very disturbing element in the Australia-China relationship, however, can you step back and say Australia is perfect, we are not perfect, look at the condition of Aboriginal people in Australia - are we so superior? No, we're not, so I'm not going to be judgmental," he said.

Chamber of Commerce and Industry WA director international trade services, Keith Seed, supports the premier's visit to China and is very confident of the trade relationship withstanding what he describes as an "isolated incident".

And despite the Australia China Business Council remaining tight-lipped about the Stern Hu affair, the council reiterated the importance of the trade relationship for both China and WA.

The council helped organise Mr Barnett's visit in tandem with about 70 other businessmen and women, including staff from Oakajee Port and Rail who are seeking Chinese investment and customer contracts for its $4 billion Mid West project.