Good news is hard to find in the resources sector, and even harder to find in the case of assets that are offered for sale but fail to attract an acceptable bid. 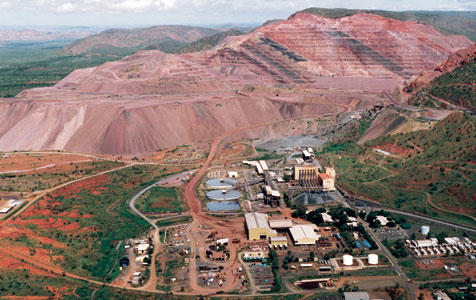 Rio Tinto's Argyle diamond mine in the state's far north.

Widely interpreted as a sign that no-one was interested in the world’s biggest source of low-quality diamonds and the occasional high-priced pink gem, the reason behind Rio Tinto’s decision to keep its Argyle diamond mine could be that a glut of diamonds on the world market is about to become a shortage.

The change, which is a result of a steep fall in global diamond output, a failure to discover fresh gem deposits, and a growing habit of Chinese men to buy a diamond engagement ring, could push gem prices up by as much as 50 per cent over the next few years.

This rosier outlook will be well understood by Rio Tinto and can be traced to one of the earlier comments by the company’s emergency chief executive, Sam Walsh, who said when announcing the cancellation of the proposed sale of Argyle: “This is not market day at the bazaar. I’d be quite happy to keep it.”

At the time, Mr Walsh’s comment was interpreted as bravado, along the lines of ‘he would say that, wouldn’t he’, after Argyle failed to attract bids that met Rio Tinto’s valuation of the asset.

However a fresh view of the diamond market compiled by analysts in the London office of the international investment bank, Citigroup, points to much higher prices as the combination of rising demand and falling supply work their magic on the price of gems.

While avoiding putting precise dollar values on diamonds, partly because there are about 4,000 categories and there can be a wide gap in values, even on individual stones, Citigroup tips prices to return to the boom-time levels of 2011, when rich investors rushed to buy diamonds as a form of capital protection with the bonus of extreme portability.

Since the peak – when the Bloomberg Diamond Price Index rocketed up by around 55 per cent from a reading of 110 to 170 – the index has fallen by 30 points to around 140.

Stability appears to be returning thanks to multiple factors, that include:

• rising demand, particularly in China, were the diamond-ring habit in that country’s commercial capital, Shanghai, has risen from 33 per cent of newly engaged couples to 62 per cent over the past 20 years;

• the disappearance of the De Beers stockpile, which acted as a buffer against extreme price swings for much of the 20th century but which has largely been sold off thanks to De Beers’ adoption of a conventional business structure rather than playing a role as the supplier of last resort.

The outlook for diamond prices, according to Citigroup and almost certainly shared by Rio Tinto, is that the diamond sector downturn is a passing trend that might roll into 2014, but from 2015 will revert to a period of increasing demand and a return to values last seen in 2011.

“Diamond prices are weaker than they were two years ago and demand is not yet strong enough for the limited mine supply to create a significant shortage,” Citigroup said.

“It is therefore likely that prices will stabilise at recent lower levels through 2013 and 2014, but that the mine supply trend, the structural demand shift in China, and a slowly recovering global economy should see diamond shortages making their mark on prices in 2015-to-2020.”

If the Citigroup outlook is correct, then the question for Rio Tinto (and WA) will become whether to retain long-term ownership of Argyle, or to reoffer it for sale when the price is right.

Where to for zinc?

AT the other end of the mineral spectrum, one of the least attractive commodities, zinc, also appears poised for an overdue price rebound.

Despite a huge global stockpile held by metal traders and in warehouses licensed by the London Metal Exchange (LME), a shortfall in mine production is expected to start influencing the market from 2015.

By the 2016-to-2018 period, as several big mines are permanently closed after running out of ore, the zinc price could come close to doubling from its average this year of around $US1940 a tonne to $US3500/t.

Major zinc producers such as Glencore Xstrata are confident that higher prices are on the way as the Brunswick and Perseverance mines in Canada get closer to closing and the Century mine in Queensland reaches its use-by date.

Some commodity consulting firms and investment banks are starting to agree with the zinc miners. Wood Mackenzie is one firm predicting a significant shortfall in the supply of zinc.

Other professional market watchers are not so sure. They want to see the 1.1 million tonne stockpile at the LME reduced substantially before they believe the zinc glut is declining.

THE outlook might not be so rosy for Woodside Petroleum and its planned entry into the world of floating LNG, with investment bank Credit Suisse echoing the warnings of gas-rival Chevron about the financial uncertainties of FLNG.

While Chevron’s criticism might be viewed as sour grapes from a company stuck with a budget-destroying $50 billion monster in the Gorgon project, the Credit Suisse critique of Woodside’s preference for FLNG as a way of developing the Browse gasfields is more thoughtful.

“Browse economics still uncertain,” Credit Suisse said in a report that handed Woodside a surprise “underperform” rating because of doubts about the company’s future profitability, and added insult to the tip by forecasting a fall in Woodside shares over the next 12 months to around $35.50 – about $3 less than the stock’s latest price.